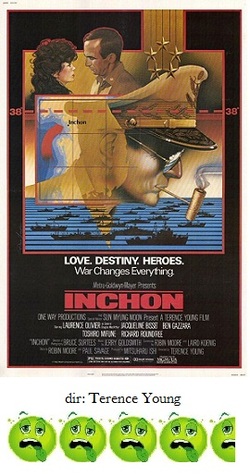 There certainly is an informative, exciting and entertaining film to be made about the battle of Inchon, considered the turning point in the Korean War, but the one titled Inchon isn't it.  It is, however, a bloated, ridiculous and desperately confused war picture that lost nearly all of its $46 million budget.

How could so many things go so wrong?  The first indication of trouble occurs with the disclaimer before Inchon even starts which warns us that it is a "dramatized story of the effect of war on a group of people" and that "where dramatic license has been deemed necessary, the authors have taken advantage of this license to dramatize the subject."  In essence, everything you will see is total bunk.  Laughably, at the tail end of the end credits there is also a disclaimer saying that "characters not indentified by name are entirely fictitious" etc.  But since all of the characters have names, it's unclear what that means.

We do get the very real Gen. Douglas MacArthur, played with eye-rolling pretentiousness by a poorly made up Laurence Olivier.  Seriously, his face is so waxen you'd swear you were looking at a stiff in a casket at a cut-rate funeral parlor.  Anyway, MacArthur is the mastermind behind the Inchon invasion, which is all well and good, but we aren't presented with this fact until the film hits the 90 minute mark.  Until then?  It's all about the rocky marriage of Ben Gazzara and Jacqueline Bisset.

As Inchon opens, the North Korean invasion breaks out while Bisset is out buying furniture, and during the course of the movie she will flee in a car, pick up a load of orphans, come perilously close to dying on a bridge, drop off the tots at a mission and still have time to meet Gazzara at a surprise reconciliatory dinner arranged by soldier Richard Roundtree.  Now, Gazzara and Roundtree are just such amazing soldiers.  They are everywhere!  The film's garbled timeline makes it impossible to determine what happens when or why.  When Bisset is trying to cross that bridge, Roundtree appears out of nowhere in order to give her a gun for protection before he himself jumps off the bridge in the attack.  Next, when Bisset's car breaks down in some unnamed, out of the way village, Roundtree appears out of nowhere again to fix it, and then he's immediately shown back by Gazzara's side at the military base.  When the enemy is ambushed by peasants armed with machine guns, it's Gazzara and Roundtree, undercover in peasant-wear, who made it possible.  In fact, in every battle line, Gazzara and Roundtree are there to lead the troops to victory, and in order for the plan to invade the port city of Inchon to succeed, it's up to Gazzara and Roundtree, along with Gazzara's mistress, to light a crucial lighthouse that will lead the American boats through the rocky straits.

These bizarre coincidences pale to the chaos of all the poorly-staged battle scenes which just have shots of people running around higgildy-piggildy, tanks running over grass huts, and explosions.  Over and over again.  Who's winning?  Who's being shot?  Where are they?  Does it even matter?  The whole film is just one big cycle of something getting blown to smithereens, Bisset and the orphans dodging bullets, Gazzara and Roundtree appearing and disappearing at random and Olivier playing to the rafters while intoning about his own greatness as a leader.  It's two and half hours of jumbled, badly written junk.  The editing is beyond wretched and, in one strange scene, where Olivier addresses a group of generals about his plan, the generals all speak in a strange, disconnected voice, sounding as if all of their dialogue were dubbed by the exact same bored person.

I neglected to mention that the Rev. Sun Myung Moon of the Unification Church financed a huge portion of Inchon, but that is more like trivia than being significant in why the movie fails.  On any list of the biggest financial flops, Inchon figures prominently.  The reason is very simple.  It sucks.