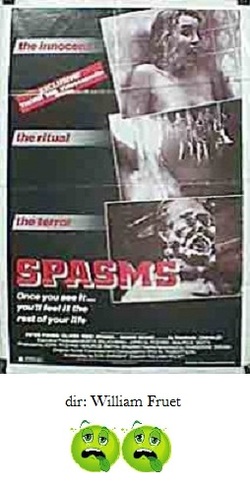 I'll bet there are few out there who thought there existed a giant snake flick that was more ponderously silly than Anaconda from 1997.  The very odd Spasms is that flick.

Our story begins on a remote island in the Pacific where a group of natives are involved in a ritual that brings about, what they claim, a great and powerful evil spirit serpent whose name is translated as "the gate of hell".  This ritual was performed at the behest of a couple of hunters who then capture this creature for transport back to America.

Come to find out, these hunters were hired by Oliver Reed, a millionaire, who has a special reason for wanting the serpent: it has to do with the fact that, seven years earlier, he was bitten by it and now has some sort of psychic link to it that causes him to 'see' through its eyes.  Reed also hires research psychologist Peter Fonda to study him and the snake and do some sort of unnamed experiments surrounding ESP, or something.  Another wrinkle in the plot involves the religious leader of a group of snake handlers who also wants the reptile and hires P.I. Al Waxman to intercept it.  Needless to say, once the crate carrying the snake arrives at Fonda's University laboratory, it gets loose and goes on a killing spree.

All of this setup is fairly interesting, but unfortunately, once the snake gets loose the movie kind of stalls out.  The whole sub-plot regarding the leader of the snake-handling church is never developed and is finally dropped altogether, but then, since Waxman gets bit and bloats up with deadly venom (the brief effects of swelling arms and faces from the snake's bite are pretty good.  The movie could've used more of this).  And the finale of Spasms is also thoroughly underwhelming.  The snake tracks down Reed (I guess it also suffered from the psychic link), and Fonda shoots it.  That's all there is to it.

I would love to say that the creature effects were good.  But they aren't.  The movie wisely never lets us actually see the snake until the film's end, and then when we see it, the result is less than convincing.  There is also a great disparity regarding the snake's size.  The crate it arrives in and escapes from (the funniest line of dialogue occurs when the dope who lets it loose, opens the crate with the fateful line "I know what I'm doing" before being so much snake-chow) is so much smaller than the snake itself.  There's no way it could've ever fit.

Reed does his usual sweaty, eye-popping bit of overacting, going into fits when he gets a flash of snake-o-vision, but at least there's life in his performance.  Fonda is practically a non-entity without a whiff of a personality above what is minimally required to actually be actively involved in the movie.

Spasms could've used a lot more levity and energy, fewer characters and a more exciting finale.  As far as creature-features go, there are a whole lot worse out there  This one isn't painful to watch, but it still leaves you feeling pretty unfulfilled.