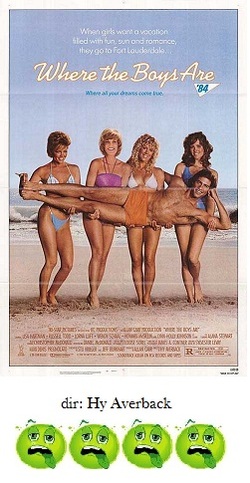 I have to assume that schlockmeister producer extraordinaire Allan Carr, the man behind Grease, but also behind Grease 2 and Can't Stop the Music, thought that the 80s trend of teen sex comedies was too male-centric; so he took Where the Boys Are, a Connie Francis beach party movie from 1960, and injected it with a crass 1980s sensibility to create Where the Boys Are '84.

Those thinking that a distaff take on the boob-centric, brain-dead comedies of the day like Spring Break and Fraternity Vacation, would have to be smarter, funnier, more interesting or less ridiculous will be sadly disappointed.  Where the Boys Are '84 is just as bad as those other movies in many ways and, since it pretends to be all positive girl-power and stuff but isn't, makes it all seem that much worse.

The movie follows a quartet of college friends, brainy good girl Lisa Hartman, southern belle Wendy Schaal, awkward Lorna Luft and slutty Lynn-Holly Johnson, as they take off for Spring break in Fort Lauderdale for some sun and horniness.  There isn't much of plot to speak of really, just a string of vignettes where the girls party, sunbathe and try to get laid, which you'd think would be fairly easy to do, but it's not.  Mostly we watch Hartman have a chaste romance with both Russell Todd, an unemployed rock musician, and Daniel McDonald, as a famous classical pianist and who is also Schaal's cousin.  Needless to say, there are zero sparks between Hartman and either of these lunkheads, so it hardly matters who she ends up with.  In the meantime, Luft tries to get over a bad breakup, Schaal does her best Dixie Carter circa "Designing Women" impersonation and Johnson tries to bed anyone she can.

Let's see...we've got endless drunken parties, we've got Schaal and Johnson getting arrested for drunken driving, we've got Luft performing in a 'Hot Bod' contest to win money to spring them from the clink, and despite having the upper body and posture of a linebacker, she wins 2nd place, we've got Schaal learning how to seduce a man by tonguing a life-size blow-up doll, we've got Johnson thinking she's gonna hook up with a big muscle-head only to find out he's a male prostitute, and so on.

Nothing in Where the Boys Are '84 is funny, or cute, or entertaining.  It's just as lame as all of those other movies from which it was marketed to be set apart. What a waste of an opportunity.