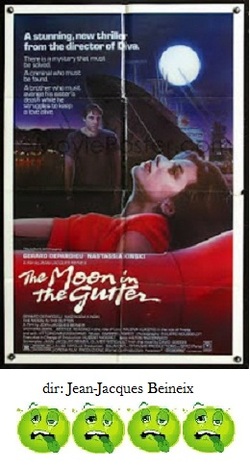 It's almost inevitable.  A young director hits a major home run his or her first time at bat.  And the follow-up?  Total strikeout.  In 1982, Jean-Jacques Beineix had a surprising international success with his first film, Diva, and with that success he had the clout to do any film he wanted.  The result?  The sluggish, incomprehensible and pretentious beyond words The Moon in the Gutter.

A plot synopsis of The Moon in the Gutter would have you believe that it was a moody, thrilling murder mystery, and it is, only without any thrills, or much of a mystery.  It does have mood, though.  In fact, that's about all it has.  Set in a bizarre-looking port city, Gerard Depardieu stars as a stevedore who is out looking for his sister's rapist.  You see, after she was raped, she slit her own throat out of pain and shame.

The only other major characters to speak of are a wealthy brother and sister, Vittorio Mezzogiorno and Nastassja Kinski, but what they have to do with the plot seems murky, at first, until the film's conclusion when it's pretty clear they have nothing to do with it at all.  There are a few other minor characters who breeze in and out, but they are mostly used as local 'color,' grotesques that serve only to make The Moon in the Gutter even more uselessly cockeyed than it already is.

The slow rhythm of the film has Depardieu enter into some seedy setting, like a bar, the docks, an alley etc., mumble incoherently and think 'deep' thoughts, while occasionally running into a character or two in which they all talk at right-angles to each other, saying so many words that mean such nothing, and then they all disperse until he trudges to another locale.  Yes, it's true that one of these people is responsible for Depardieu's sister's death, but by the final, endless scenes you won't care, even though it's fairly obvious who the guilty party is.  Upon reflection it's pretty apparent that the mystery element doesn't matter in the slightest; remove it, and nothing about the movie will have changed much.  It's a case where a film's entire plot is entirely extraneous.  It's been said the Beineix's original cut of The Moon in the Gutter was 4 hours long.  I can just imagine the bloody, mass suicides by audience members after trying to wade through twice as much of this bunk.

The only positive element about The Moon in the Gutter is the cinematography and set design.  Everything looks and feels deliberately artificial in a very interesting way.  The town is all slanted buildings on damp, off-kilter streets saturated in red and blue light.  It's clear that all of the effort was put into the look of the film and none into making sure there was a compelling reason for it even being made.

The Moon in the Gutter opened and promptly bombed.  Even though Beineix's third film, Betty Blue, garnered a Best Foreign Language Film Oscar nomination, it didn't go over well with critics or audiences either and Beineix disappeared into obscurity.  If you want an example of where a directing career officially died, look no further than The Moon in the Gutter.