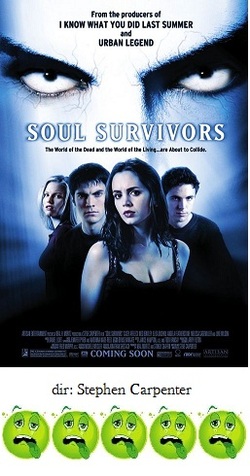 Soul Survivors is one of those painfully aggravating, wannabe surreal headtrips that simply throws in random visual imagery to help disguise the fact that there wasn't a filmable screenplay to start with.  As great a movie as Adrian Lyne's Jacob's Ladder is, it certainly has a lot to answer for.

The plot follows a quartet of boring teens, Casey Affleck, Eliza Dushku, Wes Bentley and Melissa Sagemiller, as they have one last fling before going off to college.  They decide to party down at a Goth club, and there is much useless dialogue that tries (and fails) to provide some depth to these nitwits, and there is some kissing, some whining, some pining, and blah blah blah. When in the hell does the story even get going?

Well, there is this car accident, see, and Affleck dies, and Sagemiller feels all guilty because she was driving, but Bentley is kinda happy with it since he wanted Sagemiller for himself, anyway.  Anyway, for the whole rest of Soul Survivors, we have Sagemiller hallucinating about these weird people who seem to be following her, and she has sponatneous nosebleeds, and she confides in a young priest (Luke Wilson), and is she going crazy or what?

I suppose writer/director Stephen Carpenter assumed that nobody ever saw Jacob's Ladder or the myriad other copycats that followed, because the answer to the mystery over what is going on should be painfully obvious to just about everyone.  Well....sorta.  You see, Soul Survivors doesn't even have the guts to really follow through with its own premise; it just pulls its punches and simply dies on the screen.  None of it matters.  It's enough to make you want to throw things at the screen.  Some really sharp things.

The acting by the cast is perfunctory at best.  In fact, the only bit of life to be found anywhere on the screen is the all too brief appearance of Angela Featherstone as a crazy-eyed, wickedly androgynous bad girl that Dushku hooks up with, and who seems to know an awful lot about what might be going on with Sagemiller, and who may (or may not) have somehow been involved in the car accident.

Whatever.  Soul Survivors is just a boo-worthy exercise in tedium that was wisely kept away from most critics during its initial theatrical release in 2001.  All in all, you'd probably get more entertainment value by just banging your head against a wall for the same length of time instead.