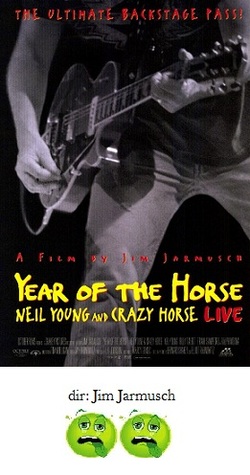 The only people I can think of who could possibly get any enjoyment out of Jim Jarmusch's sloppy documentary Year of the Horse are those die-hard Neil Young completists who will most likely watch anything that has to do with Young or his band, Crazy Horse.  Everyone else can confidently just take a pass.

Year of the Horse is a combination of concert footage, recent interviews and long-lost film from the 1970s and 80s, and I imagine something worthwhile could've been cobbled together into something that was the least bit interesting.  But, no.  You will get no insight into Neil Young.  You will get no feelings about the joys of creating or playing music.  You will get no information about the how the band works together.  In fact, you'll get pretty much nothing.

The way all of the footage is put together falls into a rather sluggish rhythm.  First we get a bit of conversation with a member of the band, then we get some of the old footage and then we get a performance number.  Lather, rinse, repeat.  If there was anything of interest happening in any of it, then it might've worked, but nothing does.  About the only insightful moment occurs when one of the band members tells a joke about drummers: Q: What's the difference between a pig and a drummer?, A: A pig won't stay up all night just to f**k a drummer.  Yeah, I know, deep.  Otherwise, we just get some random snippets of all the guys bitching at each other or doing such "cool" rock star things like setting a flower arrangement on fire.  One would think that revered (not by me) indy director Jim Jarmusch could've come up with something that at least felt like a legitimate, quality documentary, but, I suppose, he too was so enamored with Young that he couldn't be bothered with doing anything other than this substance-free puff-piece.

So how are the performances?  Well, let's just say they work best as audio wallpaper.  You know, something perfectly adequate to listen to while you're doing other constructive things around the house like cleaning the bathroom grout.  By doing so, you can easily tune most of it out.  Actually sitting and watching these performances is something else entirely.  Imagine your dad has some of his old college buddies over and then they get drunk and proceed to play Guitar Hero for the next 3 or 4 hours until they sweat to the point of passing out due to dehydration.  They come across as something like that.

Year of the Horse is just an exercise in preaching to the converted.  If nothing else, it wiil serve as evidence to non-fans that maybe, just maybe, Neil Young and Crazy Horse isn't nearly as interesting (or talented) as they've always been told.