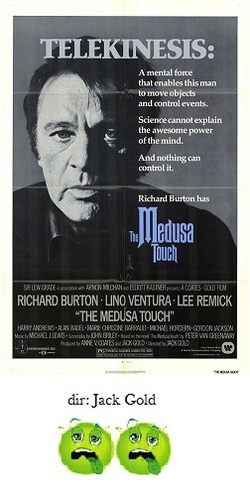 After director Brian DePalma released his telekinetic thrillers, Carrie and The Fury. the bar was forever raised and filmmakers needed to find more inventive ways to tell such stories.  The makers of The Medusa Touch obviously never got the message.

The Medusa Touch stars Richard Burton in full aged ham mode as a troubled writer who believes he has the mind-power that has caused a string of catastrophes and deaths.  In the opening scene a mysterious figure bludgeons Burton nearly to death, so for the rest of the movie we follow detective Lino Ventura as he tries to discover who was trying to kill Burton and why.  Also on hand is Lee Remick as Burton's shrink and she tells Burton's story via flashbacks.

So, why does Burton feel he has this evil power?  As a little boy he kills his nanny with measles and, in the movie's single funniest moment, offs his parents by causing their car to run them down and over a cliff.  I couldn't help it, seeing the car and the mom and dad mannequins plunging down the precipice made me giggle.  Anyway, he causes his school to burn, killing an obnoxious teacher and later causes suicides and heartattacks to anyone who pisses him off.  How do we know he's using his telekinetic powers?  Well, he just opens his eyes real big and glares while maintaining the same one grim expression throughout the entire movie.  Burton bloviates with some of the most pretentious dialogue he's ever uttered in his long, patchy career only taking pause to stare at someone or something menacingly.

The plot moves along at a sluggish pace as Burton lies unconscious in a hospital as doctors stare endlessly at his EEG watching his brainwaves getting stronger and stronger until it all culminates in the collapse of a cathedral.  Admittedly, this finale is handled pretty well and it was pretty fun watching the walls and ceiling crush scores of hysterical people.  I don't feel in the least bit guilty about enjoying this sequence because the cathedral was so obviously cracking apart that they all pretty much deserved it.  Really.  Pieces of it had been falling down for several days by this point and despite the moronic priests' protestations that everything is "fine," anyone that would enter that building was just asking for it.

It's true that the movie's biggest plot point is the discovery about who tried to kill Burton, but the answer is so completely obvious to anyone who'd ever seen a movie before.  Not that it makes any difference since Ventura begins to believe in Burton's power and figures he should die anyway.

When The Medusa Touch isn't boring the audience silly it's just plain, old, run-of-the-mill silly.  The thrills are non-existent and the acting is pure corn.  It's certainly not the worst movie of its kind, but it might have been received better had it been released fifteen years earlier.  By the time it hit theaters it was already past its expiration date.