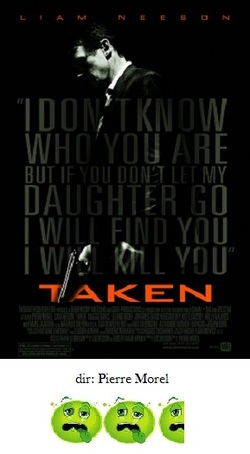 The critical and commercial success of Taken totally mystifies me.  Here is a routine, neutered revenge thriller that does nothing to distinguish itself from the myriad of similar movies that came before it except, that is, for containing one stunningly awful performance.

Liam Neeson plays a former CIA agent whose teenage daughter, Maggie Grace, is kidnapped by sex traffickers while on a trip to Europe. So, the basic thrust of the story involves Neeson mowing down all those who are responsible for the abduction and getting her back.

Considering that Taken is all about the violence and the sex, it's bewildering how it could possibly fit into a PG-13 friendly framework.  It can't.  It's the crassest attempt at having its cake and eating it, too.  People are run down my cars, dozens are blown to bits by gunfire, there are slicings and beatings and, in one scene, Neeson  slowly and painfully tortures a suspect for information.  The level of brutality here is enough to make you both achy and queasy.  Through all of this carnage, there is not one single drop of blood to be found.  It's as if the morons at the MPAA are indicating that it doesn't matter how many people are violently killed in a movie, if there is no red stuff, it doesn't count.  There is also a scene at a drug den where dozens of scantily clad, kidnapped women are forcibly injected with heroin, and ludicrously of all, when the women are hauled out for display for the highest bidders, they still get to wear their underwear.  Yes, a movie can use the 'f word' three times and get slapped with an 'R' rating, but beating, shooting, drugging and sex-trafficking as shown here?  Not a problem.

But all of that is beside the point.  The story is predictable, unsurprising and thoroughly mediocre regardless of the violence level or political shenanigans.  Which leads us to the most risible part of Taken.  That would be the terrible performance of Maggie Grace.  First, Grace is disastrously miscast, looking an easy dozen years too old to be playing an underage girl.  She might have suspected the same thing, so she overcompensates by making the character whiny and obnoxious and squealy and unintentionally a little brain-damaged.  So, no, I didn't really care if Neeson got her back or not.  If you ask me, she could've benefitted from a few months in white slavery.

Taken is just so non-special, so disposable, so blah.  The hows and whys of its success and the chord it struck with so many people is confounding, indeed.  I should probably watch Taken again to solve this enigma, but I've got better things to do with my time like count the grains inside a ten pound bag of rice.