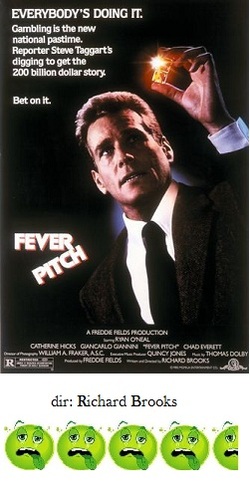 What a sad epitaph for director Richard Brooks.  The man behind such great films as Cat On a Hot Tin Roof, Sweet Bird of Youth, In Cold Blood and Looking For Mr. Goodbar ended his illustrious career with the howlingly awful Fever Pitch.  Fever Pitch was supposed to be a hard-hitting expose of the gambling industry, but wound up being laughed off the screen.

Fever Pitch stars the reliably bad Ryan O’Neal as a sports journalist who is writing a series of articles about gambling and gambling addiction, and even though O’Neal is a gambling addict himself and his articles, featuring a non-existent person known as “Mr. Green,” are obviously autobiographical, his bosses at the paper are very slow to catch on. Another problem is the large sum of money owes to a loan shark played by Chad Everett.  Also on hand are Catherine Hicks as the waitress/prostitute at the MGM Grand that O’Neal takes a shine to.  All of this could’ve been turned into something quite great, but the script is so ridiculous and the performances by all are so awful that you simply
stare at the screen and watch the results self-destruct.

From minute one of Fever Pitch, it is apparent that you are in the presence of a real turkey.  In fact, if you didn’t know any better you’d swear it was a comedy.  The script, also by Brooks, contains some of the weirdest dialogue you are likely to hear. Weird in the sense that no one who you’ve ever met, nor anyone who has ever lived, speaks like the characters here. It’s as if every character in every scene is given a bizarre, convoluted soliloquy to utter and the trapped actors can’t seem to find any believable away to make any of it sound natural; instead, scene after scene just flops and dies.  O’Neal’s work here is typically flat and empty, and to balance him, everyone else cranks it up to 11.  Hicks is always in borderline hysterics whether she’s at the craps table or serving drinks and Everett snarls and barks all throbbing temples and steam coming out of his ears.

So, what’s the worst moment in Fever Pitch?  It’s hard to say.  There are so many.  Maybe it’s where O’Neal is being tracked by one of Everett’s henchmen who wears a neck brace and is thwarted by being captured with an inflated inner tube.  Or how about a flashback where we discover that O’Neal’s wife is killed in a car accident while racing to bring him $5000 to pay off a poker debt?  While being held at knife point by the collectors, he gets a phone call from the police (the collector warns him, “Don’t tell them where you are!” forgetting that, you know, they kinda had to know where he was to call him) and then staves them off while swinging a telephone above his head like a lasso.  He gets to his wife as she is being loaded into the back of an ambulance still clutching the blood-soaked wad of money.  No, the worst moment has to be the finale, where O’Neal, now clean and a diehard member of Gamblers Anonymous, decides to make another bet to clear all of his debts and is cheered on by Hicks and the president of the local Gamblers Anonymous.  You see, it’s okay, he just gambled enough to break even, he’s gonna be a-ok!

Needless to say, Fever Pitch ended up being one of the biggest laughing stocks of 1985.  When John Travolta’s journalist in Perfect from the same year, comes across as a more believable and fully-realized character than O’Neal’s, you know there are some serious problems.  The only function Fever Pitch seems to serve is that of a filmed suicide note from a once respected director.