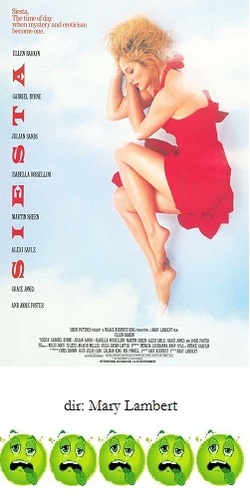 Some movies evoke the feelings in a viewer of being enmeshed in a nightmare. Sometimes this is on purpose (A Nightmare on Elm Street, Jacob's Ladder) but sometimes this is purely accidental. Siesta is an accidental nightmare of Chernobyl proportions, and I don't say that as any kind of recommendation.

Ellen Barkin stars as a stunt-woman/daredevil who is planning a big stunt which involves free-falling from an airplane onto a giant net which will be stretched across a man-made volcano. Um, okay. Anyway, fearing she may not live through it, she hightails it to Spain to have one last final fling with her old boyfriend Gabriel Byrne, who happens to now be married to Isabella Rosselini.

Now I've explained the set up. However, I have not mentioned how this is pieced together. All of this is showed in flashbacks, see, because really, Barkin awakes in a field covered in blood and suffering amnesia, and she is sort of putting all of these memory flashes together.

For the entire film, Barkin runs around the city, trying to figure out "what the hell is going on?" (you said it!), crossed paths with a myriad of strange characters. There is a cab driver with metallic teeth who shows up periodically to offer rides, there is an artiste played by Julian Sands, a jet-setting eurotrash babe played by Jodie Foster (naturally she did this film when her career was waning, just before her Oscar in The Accused, and I'll be she is still trying to live this one down), and some rich babe who deals in fake passports (a very brief Grace Jones).

Barkin runs around with Foster and Sands through most of the movie. Sands at one point, throws an art dealer through a glass door, afterwards Foster notices that Barkin has a shard of glass stuck in her arm. Barkin replies "I didn't even feel it." At this, you almost expect a giant neon sign spelling "clue" to flash on the screen. It's just so....subtle you know. Anyway, to pay for the gin which Sands uses to clean the wound, Barkin does a tightrope walk over the cafe (?).

Foster next gives Barkin a really bad haircut, which makes her head look like a poodle. Afterwards at Jones's apartment, Barkin, I don't know, freaks out I guess, then jumps out a window and lands on top of a bus which then pulls away to drive to parts unknown. Next Barkin is again picked up by the cab driver, they get into an accident and instead of taking the other injured driver to the hospital, they go to an abandoned house where the cabbie rapes Barkin while the bleeding motorist watches.

Everything culminates, as it must, with the realization that, gasp, Barkin really is dead and all of the movie was really the soul's last moments of realization. Kind of makes your head want to explode, don't it?  I've left out so much. So much goes on that doesn't make a lick of sense, that it is hardly worth mentioning. There is mention of a holy miracle occuring in a garden, Sands at various times quotes Shakespeare for no apparant reason, Barkin subathes in the nude after rinsing her bloody dress in a creek, there are shots of Barkin falling out of a plane sprinkled throughout to evoke mood, I guess. There is still more, but why bother wasting valuable space.

Siesta is a movie where everything is confusing but still makes perfect sense at the same time, simply because of its cheesy ending. But getting there is simply unendurable. Director Mary Lambert, astoundingly, was able to work again doing a bang up job with Stephen King's Pet Sematary, who knew?  I don't have to tell you to avoid this one at all costs, now do I?