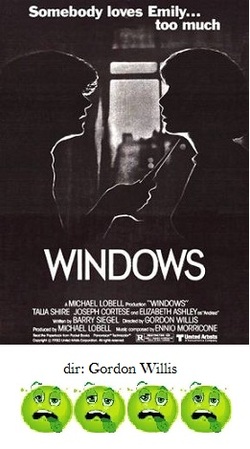 Windows stars Talia Shire as a recently divorced woman who is not only shy, sweet and meek, but the script makes her a stutterer as well, I guess to make her even more of a pathetic victim than she's getting ready to be.  Anyway, one night while entering her apartment she is grabbed by a strange man who assaults and terrifies her with a switchblade.  Oh, and he also records an audio tape of the incident.  After the attack, Shire moves into a new apartment and begins a very tentative relationship with the detective in charge of the case, Joe Cortese.

So, what does this have to do with lesbians, you ask?  Well, the other main character in Windows is Shire's good friend, raspy-voiced Elizabeth Ashley.  Ashley is totally in love and obsessed with Shire, and she actually hired the man to brutalize Shire so she could have the audio tape to listen to.  Ashley likes to listen to Shire's suffering while she strokes the telescope she uses to spy on Shire.

Now going off the deep end from jealousy, Ashley kills both Shire's cat and a nosy neighbor and then slices up the shrink who's threatening to have her committed.  The film's climax occurs when Shire is tricked into coming over to Ashley's apartment where Ashley attacks Shire with the same switchblade and  forces her to expose herself before going totally batsh*t crazy by pulling on her hair and babbling nonsense.  The most frustrating part of Windows occurs right after this scene with the final moments of Shire and Cortese taking a walk while he chastises her for leaving her apartment, and Shire says "she would never have hurt me." What happened to Ashley?  Did she get arrested?  Get killed?  Swallow her own tongue?  We never know.

Windows was the sole directing effort by cinematographer extraordinaire Gordon Willis, the man responsible for the look of The Godfather series and a favorite of Woody Allen's.  So, it's not surprising that the best thing about Windows is the way it looks, with its effective frame compositions and terrific use of shadows that do contribute to a feeling of ominous dread.  But to what end?

Windows is just sleazy and trashy and very, very slow.  Even though it was the very first movie to be released in 1980 it was yanked from distribution almost immediately due to the vocal protestations of lesbian groups.  It proves that some forgotten movies had a very good reason to be forgotten.