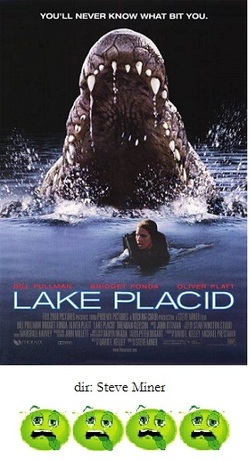 The film begins typically enough with the croc first making its appearance by biting a diver in half. The local law enforcement finds a tooth and calls a museum for a paleontologist (a badly miscast Bridget Fonda) to help figure out what exactly this creature is. Next an international crocodile hunter, Oliver Platt, arrives; and along with Bill Pullman, a police officer, they bop around the lake in little aluminum boats to find the creature.

Lake Placid, which is an odd title for this movie considering the lake is called Black Lake, is very sloooooooow going. And with a running time of less than 90 minutes, it seems the bare bones of an idea was padded mercilessly with supposedly witty banter and what passes for character development.

An air of desperation hangs completely over this mess to such an extent that the filmmakers have cast Betty White as an ornery biddy who feeds the croc live cattle, and has her utter phrases like "This is where if I had a d*ck, I'd tell you to suck it," and "Officer F*ckmeat". It really is sad when, after the film is over, the only thing anyone can talk about is Betty White's dialogue.

The gore quotient is really low, not even allowing any enjoyment on a purely ick level. Apart from the aforementioned bisected diver, there is a deputy whose head is quickly chomped off; however, this happens while every other cast member that's also on the small boat with the deputy, is looking in the other direction. So, you know, no one actually SEES this happen. That's one smart reptile. Also, there is a running gag where Fonda is assaulted by decapitated heads every once in a while. This is played for laughs. Needless to say, it doesn't work.

Amidst the unhorrifying horror, and the lame humor, Lake Placid suddenly turns into some sort of insincere PETA propaganda piece. The morality of whether or not the beast should be killed comes into question, and several characters even shed tears in the croc's defense. Do we have the "right" to kill it and blah blah blah.

Lake Placid finally winds up with the crocodile trapped in a helicopter (don't ask), riddled with tranquilizer darts. And, then, surprise! A second crocodile jumps out of the water just in time to get its head blown to chunky bits. The movie actually gets its cake and its moral righteousness too.  And I needn't tell you that before the final credits roll, Betty White is feeding little baby crocs in the lake, and we get a parting shot of the tranquilized father (mother?) strapped to a tractor trailer, barrelling down the highway.

So, how did I like Lake Placid?  It sucked...but that Betty White...what a hoot!