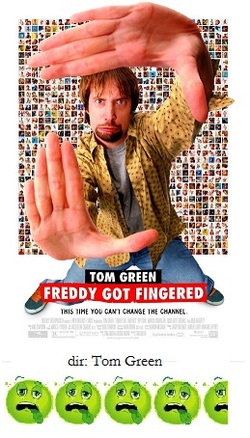 Ummmm....where to begin?  I think the appeal of Freddy Got Fingered almost certainly depends upong being a fan of Tom Green, but his humor is lost on me.

Freddy Got Fingered, directed by, co-written by and starring Green, makes the fatal mistake of assuming the mere presence of Green would send audiences into paroxysms of laughter and that anything resembling coherence, story, taste or real humor was tossed out the window.

Another problem is Green's performance. Some may call his form of gross-out humor to be surrealistic, dadaistic or any other kind of -istic, but really, if you look at the character of Gord Brody that Green plays here, all you can think of is: Is this guy actually brain-damaged or psychotic, or both. It's not funny, it's disturbed, what with the twisted-faces, screaming fits, hyperactive twitching, endless word repeating, and creepy pantomimes.

Anyway, on with the movie. Freddy Got Fingered is, essentially, the story of Gord. You see, he's 28 and lives with his parents but wants to go to Hollywood to become a successful animator. After bombing in Tinsel Town, he moves back home much to his parents' chagrin. Will Gord realize his dream?  Here is how the story goes. Gord skateboards in a mall, knocking over the elderly and handicapped. Funny stuff, that. He leaves for Hollywood, and while on the road he notices a stabled horse with an erection, and for no reason he leaps out of his car so he can grab and jiggle the horse's dripping penis while yelling "Look at me, I'm a farmer!" Naturally, he fails to sell any of his drawings and arrives back home to his parents, played by an embarassed looking Julie Hagerty and Rip Torn.

Now, a word about Rip Torn. Rarely have I witnessed a more humiliated performance as Torn's.  He goes through so much embarassment and torture at the hands of Green, and is required to debase himself to such extremes, that I became, literally, depressed every time he came onto the screen. Torn is a very good actor and comedian, but rarely has he looked so tired or looked so bad. The indignities his character goes through include, being drenched with water at a fancy restaurant, being wrongly accused of child molestation, hence the title ("Daddy takes my brother Freddy down to the basement! And he fingers him!", exclaims Gord), and of course, being hosed down in elephant semen during the film's finale. The single worst moment of Torn's career, or his life, is in an argument between he and Gord which goes thus:
Gord: "F*ck you, dad." Dad: "F*ck me?, That what you want, to f*ck me?", whereapon Torn drops trou exposing his naked butt to Gord, demanding, well, to be f*cked. It isn't pretty.

Let's see what else we have here. Gord's friend suffers a compound fracture during a skateboarding accident and Gord then licks the exposed bone sticking out of his leg. Why? No reason. Gord gets romantically involved with a paraplegic doctor (Marisa Coughlin) who likes her legs beaten by a bamboo cane until she's turned on enough to give him blowjobs. Gord helps with the delivery of a baby, only to helpfully chew through the umbilical cord and swing the child around until he cries. Gord also guts and skins a deer so he can run around in its bloody pelt, and, of course, when Gord finally does sell his drawings, they are used to create a hit animated series, the insane "Zebras in America," featuring a family of half people/half zebras ("Hear that funny sound? It's my hooves! Listen to my hooooooves!!")

To some, all of the above sounds almost too bizarre to be believed, and I don't blame anyone who decides to watch Freddy Got Fingered just to see it.  After all, the geeky curiosity factor is what hooked me. At times you will be aghast at what is transpiring on the screen, cringing at others, and shaking your head sadly throughout.

Freddy Got Fingered is, essentially, just an endless series of unrelated gag-inducing scenes, that have no real form, structure or purpose. It's just a Tom Green ego-trip.