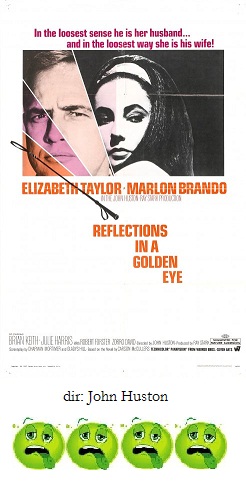 For several years I had been wanting to see Reflections in Golden Eye because of its notorious, bad movie infamy. Where else you can you see major stars of that era, Elizabeth Taylor and Marlon Brando, embarrass themselves so completely?.

Based on the novel by Carson McCullers, Reflections in a Golden Eye takes place on a southern Army base and deals with a married couple (Taylor and Brando) dealing with sexual repression. Taylor is a shrill, buxom housefrau and Brando is an uptight, prissy Army officer. The problem? Taylor is having a hot and heavy affair with Brian Keith who is married to a fragile Julie Harris, and Brando is secretly obsessed with a studly, young private played by Robert Forster in his film debut).

Taylor and Brando's relationship is established with the usual harping and screaming. One fight ends with Taylor completely disrobing and threatening Brando with being "dragged out in the street and thrashed by a naked woman" which causes Brando to seethe, his eyes to bug, and yelling "I hate you!" All the while, Forster lurks outside watching.

Next door we have unhappily married couple number 2, Keith and Harris. Julie Harris is a bit frail, still traumatized from the death of their infant daughter, whereapon she mutilated herself. As Taylor helpfully explains, "I can't imagine. Cuttin' off your own nipples!", to which Keith replies, "Well, the doctor's said she was neurotic." Harris holes up in the house painting with her queenie Phillipino houseboy played, reprehensibly, by Zorro David. Every time the film goes to a scene between Harris and David it stops dead. Really dead. Keith apparantly feels the same way by rolling his eyes everytime David opens his mouth, to which David usually responds by a sneering, performing a womanly hair toss, or a giving a pursed lip air-kiss. Eventually Keith decides Harris needs to be committed. After dropping her off at the local sanitarium she suddenly and unexplainably has a coronary. No one seems to be too upset about it.

Now, Brando has some serious issues to deal with. You see, he wants Forster in the worst way, but being the military man that he is he must repress, repress, repress. At one point he spies Forster sunbathing in the nude, after which he is bucked off of Taylor's prized stallion. These events coinciding causes Brando to squench up his face, sob, and then take a tree-branch and beat the crap out of the horse. Taylor discovers this, and at a dinner party she's throwing, takes a riding crop and beats Brando in the face in front of the stunned guests.

Forster spends most of the movie skulking around, eventually getting up the nerve to break into Taylor and Brando's house so he can sniff her underwear.  Brando at various times steals away into his study so he can look over his little trinkets to his budding gayness which include photographs of gladiators and a tiny, antique silver teaspoon. Later he obtains Forster's discarded Baby Ruth candy-wrapper which he folds into a phallic shape and strokes.

The ending, as you might have guessed, has Forster breaking in, Brando barging into Taylor's bedroom to find him sniffing a nightgown, and then shooting him dead. What you might not have guessed is that director John Huston (yes, THE John Huston), swings the camera from Brando glowering, Taylor shrieking, and Forster lying dead...then back to Taylor and then back to Brando, then Taylor, then Forster, then Taylor, Brando, Taylor, Forster, Taylor, Brando....and then the credits roll.

Whew, what a mess.  Brando deserved a few more lashes with the riding crop for this performance, which, ironically, is the most entertaining part of this flick. Considering he's not the most comprehensible talker, the really hideous southern accent he adopts renders everything he says, unintelligible. Seriously, I think I understood about ten words he said throughout the whole thing. Otherwise, he stands around stricken with Forster's beauty and other times bellows and cries for all he's worth, given new meaning to the word "overwrought".

So sit back, have a mint julep, and bask in the wretchedness of "Reflections in a Golden Eye".