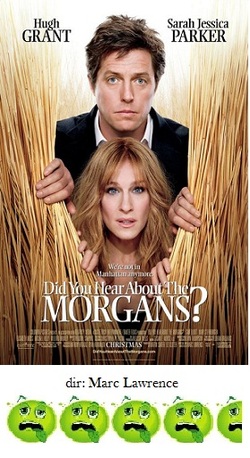 Yes, I heard about the Morgans, and I wish so very much that I hadn't.  Did You Hear About the Morgans? is a desperately routine, dull, and unfunny trudge through a swamp of cliches and banality.

The generic plot involves the unhappily married Hugh Grant and Sarah Jessica Parker who are two New York City yuppies who, of course, witness a murder and must go into the witness relocation program.  They find themselves with new identities out in Wyoming which is the cue to us that wacky, fish-out-of-water highjinks will ensue.

See Parker try to ride a horse!  Watch Grant flee from a bear!  Watch these vegetarians have to cope with western-style vittles!   Isn't it all just too funny?  Like something you've never seen a bazillion times before?  Naturally, the bad guys find them, and naturally they've learned to embrace their new community, and naturally they survive to save the day, and naturally they fall in love again.

The whole film has been written on autopilot.  It's as if a computer had analyzed every script that was even written, found the most common denominators, filtered out anything that may smack of originality or creativity, and coughed out the results.  Voila!  Did You Hear About the Morgans? is made.  And since it took no brains to write it, it took no brains for some studio exec to greenlight it and position it as a holiday crowd-pleaser.  We are not pleased.

Parker and Grant go through the motions, acting with the least amount of effort required and nothing is required of them.  They just act exactly like their already worn out personas.  Sam Elliot and Mary Steenburgen also cash in paychecks as the couple whose home Grant and Parker must remain at in order to be safe from the baddies, but they don't bring anything to the table, either.

Did You Hear About the Morgans? is so witless and bankrupt of any entertainment value that it makes such innocuous comedies as When in Rome and You Again seem almost charming by comparison.