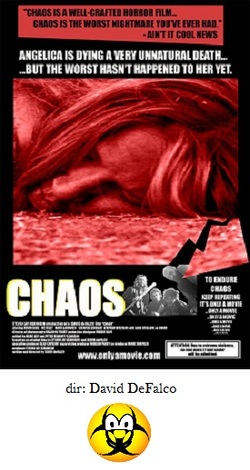 See if this sounds familiar: two teenage girls are on their way to a rave.  They approach a young man in order to score some Ecstasy and he leads them to the hideout of his criminal uncle and his gang.  This group abducts, rapes, tortures and butchers the two girls.  When their car breaks down afterwards, they find unknowingly themselves seeking shelter in the home of one of the dead girl's parents.  Mom and Dad finally realize what's happened to their daughter and now that they know this group is responsible, they turn the tables and try to murder the murderers.

Sounds an awful lot like Wes Craven's Last on the Left, doesn't it?  Simply exchange 'rave' for 'concert', 'Ecstasy' for 'pot' and let the main bad guy (in this case Kevin Gage) win in the end.  Even the promotional poster includes a rip-off:  "To Endure Chaos Keep Repeating, It's Only a Movie...Only a Movie" which is nearly identical to Last House on the Left's "To Avoid Fainting Keep Repeating, It's Only a Movie...Only a Movie."  But, really, this all  beside the point.  Even if Chaos wasn't a clear rip-off, it would be just as repellent.

For those only interested in the brutality on screen, let's just say that it makes either version of I Spit On Your Grave seem pretty tame, and no, that's not a recommendation.  One girl has one of her nipples sliced off, and while she screams and blood spurts from her breast, Gage chews it up, spits it out, and then force feeds it to her which causes her to vomit all over herself.  Next, she's gang-raped and stabbed repeatedly in close up detail.  Like Last House on the Left, the second girl manages a brief escape, but is soon captured and sliced up, or as Gage helpfully says, "She used to have two little holes, now she's got one big one."

The only break from the formula writer/director David DeFalco (a professional wrestler turned schlock moviemaker, who vehemently denied that Chaos had anything to do with Last House on the Left) makes is in the finale, where the revenge-seeking parents murder all of the villains except for Gage, who then manages to kill them both and escape.  Blood spurts all over everything, gun blasts blow holes in various characters chests or blasts their heads clean off, etc. etc.

Even those viewers who may be curious about watching Chaos, even if it's simply for the geek factor, will feel a deep sense of shame for having somehow participated in its very existence.  I know I do.