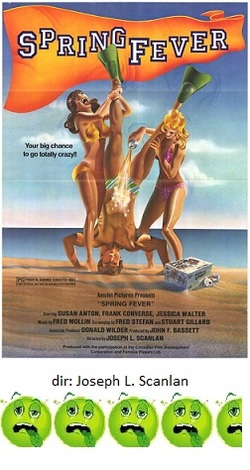 ﻿     There probably hasn't been a more egregious case of false advertising in the history of movies than Spring Fever.  Look at the poster and what do you see?  Two bikini-clad babes on the beach pouring a beer down onto the crotch of a dude, wearing a speedo, while doing a handstand.  So, crazy, sexy beach party movie, right?  Wrong.  Spring Fever is actually about a 13 year-old girl playing in the Junior Nationals Tennis Tournament and her patchy relationship with her free-spirited mother.  Really.

﻿Young tennis star Carling Bassett is our heroine and Susan Anton is said free-spirited mother.  You see, they are from the wrong side of the tracks in Las Vegas and have travelled to swanky southern Florida for the tournament alongside a bunch of rich and bitchy other players and their parents.  But whoa is Bassett who must endure the ogling Anton receives from men and the rude comments from the tennis association.  The villain of this piece is Jessica Walter as the hateful mother of the #1 seeded player, and she can't stand that Bassett and her daughter have become besties.

﻿     Will Bassett win the tournament?  Will she and Anton come to an understanding?  Is this really what you cared about when you decided to watch this twaddle based on the titillating poster?  No?  Didn't think so.

Regardless of the bait and switch, how is the movie on its own?  It's amateur hour indeed.  Despite the presences of Anton and Walter, Spring Fever is strictly bargain-basement, after-school special-level filmmaking at best.  Everything is so predictable and lifeless.  We get countless mother-daughter talks and arguments which are periodically interrupted with a tennis match which would be all well and good if those matches were filmed with any sense of suspense or excitement.  But they aren't.  It's just a bunch of brief, random shots of the girls swatting at the balls while we have no idea who is winning or why or how.  The matches are just kinda over.  Even the grand finale where Bassett battles her new best friend (who just sold her down the river when some of Walter's money goes missing) has no spark.  We get random shots of the scoreboard so at least we know it's a tight match.  But it all ends with Bassett winning (shock), and she and Anton head back home a little wiser.

As far as the acting goes, Anton is fairly likeable, but Walter marches through her feeble part as professionally as she can.  The less said about the acting talents of the young tennis starlets the better.  Bassett, who went on to have a fairly successful professional tennis career in the years that followed, wisely leaving Hollywood behind shortly after the film's release, because, let's be frank, her performance here is perfectly dreadful.

Spring Fever is a dull and pointless exercise in non-entertainment.  I would say that the filmmakers should've begun with the poster and crafted a movie around that, because there would at least be some hedonism and skin to keep the audience awake (a PG-rated girl's trip to a male strip club is about as energetic as Spring Fever gets); but, then again, the similarly-titled and R-rated Spring Break came out shortly afterwards and it's even worse, so go figure.