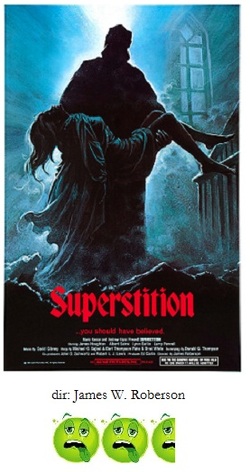 I'm not entirely sure what to make of Superstition. I think there was an attempt to create a super-spooky, haunted house tale, but somehow it was decided that the bloodier the better; therefore, all of the menacing atmosphere, plot construction and above-par acting was punctuated with gore so extreme it is almost unsettling. The gears shift so suddenly that the whole delicate balance is thrown completely off.

There's this abandonded creepy mansion the local church owns and that the sheriff's office wants torn down. A newly appointed young priest decides it's perfect for renovation and to provide lodgings for a recovering alcoholic priest and his family. Despite dire warnings from the crazy groundskeeper, they decide to move forward with the plan.

The house really isn't the problem, see, it's the pond on the property that's the issue. Black Pond is said to be where an evil witch from 1692 was executed and vowed revenge.  While attempting the drain the pond, a huge gold crucifix is found, which the groundskeeper says was put there to keep the witch at bay. Uh oh.

Immediately, various creepy things begin to happen, and in the film's most egregious logical error, the entire rest of the movie takes place in one single day, the day when the family moves in. Really.  To the point, at least.  A workman disappears while working in the basement. The family decides to stay. One of the daughters is grabbed by a dismembered hand while swimming in Black Pond. They stay. They hear about the house's bloody history and the grabbed daughter has gory nightmares. They stay. The young son disappears. They stay.

In any case, the witch does rise again and slaughters the entire family. The mother is thrown around the kitchen and ripped to shreds, the father is cut apart by an exploding mirror, one daughter's head is spiked to the attic floor, the other is ripped apart in a car, etc. The young priest thinks he's beaten the witch into submission with the cross but is dragged into the pond to his death, anyway.

The story of the witch and Black Pond is actually interesting, and the flashbacks to 1692 are not too bad for a low-budget outing. All of the elements are there for something truly scary and special. But at some point, the filmmakers lost heart.  I was interested in following the story, but instead of being caught up in the suspense and being truly terrified, I was actually cringing a bit waiting for the next over-the-top gore scene. Besides the head spiking, and the body ripping, we also have an exploding decapitated head in a microwave, anda  stabbing so brutal that a man is actually bisected leaving a quivering torso with dripping out intestines, another person is crushed slowly in a wine press, a priest is sawed through the chest by a flying buzzsaw blade, etc.

Every time the film begins to build to something, you want to turn away from the extreme nastiness. Superstition is definitely a wasted opportunity.  What could have been an enduring classic turns out to be a disposable, insulting and forgotten gore film.