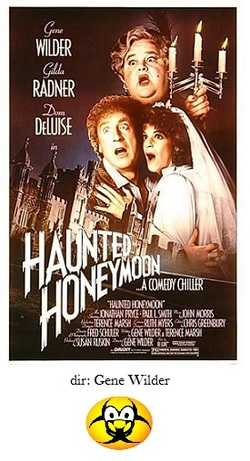 If you want to know why the great Gilda Radner never really hit it big in the movies (before her untimely death in 1989) after her years on Saturday Night Live, here's your answer: Gene Wilder.  The two met, fell in love, got married, and Radner decided to lash her acting career to Wilder's.  First was the mildly annoying Hanky Panky, next came the stunningly idiotic The Woman in Red, and finally, the worst of them all, Haunted Honeymoon.

Usually this would be where I would question how Wilder and Radner could've read the script for Haunted Honeymoon and not see that it was a dog.  However, Wilder himself co-wrote the screenplay and, unbelievably, directed it.  So, I would imagine he found it all funny.  At least someone did.

The moronic story is about Wilder, a top performer on a horror radio show, who takes his fiancee, Radner, to the creepy castle of his Aunt Kate (Dom DeLuise in drag) for the wedding.  After other family members arrive, DeLuise proclaims that someone is a werewolf.  Also present is Wilder's shrink whose goal is to cure Wilder from his pathologic phobias by scaring him so badly he'll be cured.  Various characters kick off and Wilder keeps getting more and more freaked out...so, are the scares real or faked?

Regardless of the plot, is it funny?  Not even a little bit.  There's not one solitary, lonely chuckle throughout this desert of tedium.  Nothing works.  The parts that are supposed to be funny, aren't, the parts that aren't supposed to be funny, aren't.  The whiff of desperation hangs so heavy over Haunted Honeymoon that Wilder even lowers himself to recycle gags from Mel Brooks's Young Frankenstein and High Anxiety.  The lowest of many, many low points occurs when Radner and DeLuise perform an impromptu song and dance number for no reason whatsoever that grinds this already slow-moving movie to a deadening halt.  As if all this weren't already bad enough, the reprehensible 'trick' ending is enough to make one throw things at the screen.

Haunted Honeymoon is an anti-comedy, a complete humor vacuum.  It's a stunning failure and a most depressing send-off for Gilda Radner, one of the greatest comediennes of all time.