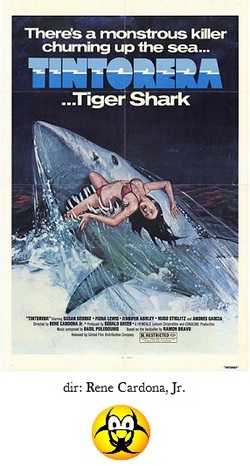 Also known as Tintorera: Killer Shark, Tintorera: Tiger Shark or Tintorera: The Silent Death, but under any name, this lousy gem still bites.  Of all the films that popped up in the wake of Jaws, this one is the most baffling.  What we have here is a z-grade, no-budget, Spanish-produced piece of junk that is less concerned with anything having to do with the shark, and is more interested in getting the cast naked.

There really isn't much of a story to describe.  We have a couple of shark hunters (Hugo Stiglitz and Andres Garcia, who?) who find and bed any lonely female around, and most of the film is devoted to this activity.  First they encounter Fiona Lewis (The Fury) and she bounces from one of the guys to the other until she is devoured by a shark while taking a nude morning swim alone.  Naturally, the guys think she just skipped off and have no clue she was turned into breakfast.  Next, they meet the consistently awful Susan George (Mandingo) and she decides they should be a threesome.  The rest of the movie intersperses the bed-hopping and naked swimming with occasional shark-hunting footage; disgustingly, the hunting footage is real and who knows how many sharks were really slaughtered for this film.

Where does this all lead to?  Let's see, Garcia gets eaten, and then in the film's grand finale, which takes up the last 90 seconds or so, Stiglitz finds the offending shark and kills it, followed by hasty credits and a terrible theme song.

Tintorera was directed by sleaze-meister Rene Cardona Jr. who was also the 'creative force' behind such other worthless movies as Survive! and Guyana-Cult of the Damned, so it's really no surprise that this film is also a piece of garbage.

If you're looking for a good horror film, or even just a good film, stay clear of Tintorera, but if you're only interested in a titillating and endless parade of naked flesh, then this might do quite nicely.