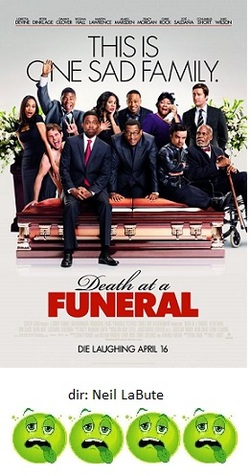 Why does this movie even exist?  On the list of completely unnecessary remakes, Death at a Funeral is one of the more inexplicable.  Director Frank Oz released his thoroughly delightful British comedy in 2007, and although it was not a huge hit, it became something of a cult discovery.  For whatever reason, Hollywood decided that we needed an American version and so we were given this forced and shrill remake that sucked out all of the humor, life and fun.  In this transplant operation, the patient has died.

The story and events are essentially identical: we spend the day at the estate of a goofy family as they are engaged in the funeral of the clan patriarch.  Chris Rock is the responsible brother trying to make sure everything runs smoothly and Martin Lawrence is the other brother who is a famous author.  Other players include Danny Glover, Loretta Devine, Zoe Saldana, Tracy Morgan, Keith David, Ron Glass, James Marsden, and Luke Wilson as various relatives, guests, and hangers-on.  And, of course, there is Peter Dinklage, reprising his role in the original, as the stranger in their midst who has a certain unmentionable secret regarding his relationship with the deceased.

We have a misplaced corpse, a bottle of hallucinogenic pills that causes Marsden to act completely blitzed throughout the movie, poop jokes involving a crotchety Glover's inability to use the toilet by himself, and relationship misunderstandings amongst various characters.  What does it all amount to?  Not much.

So why did all of this work in the 2007 film and fall flat here?  I think it has to do with the nature of British comedy and the precious commodity of precise comic timing.  The whole dignity that the British bring to social comedy doesn't translate to American situations, and the way those characters downplay the events in order to make them have a greater impact also aids in delivering the punch-lines.  Such over the top actors like Rock and Lawrence don't know how to finesse any of the jokes.  Instead of letting the humor keep building to a terrific crescendo, they keep reaching and straining to push every situation to its obvious conclusion that joke after joke simply dies.  Also guilty is Marsden who turns his character into a cartoon instead of taking the opportunity to deliver a great physically comedic performance.  Watch Marsden and then look at the near genius work by Alan Tudyk from the original as a comparison.  Tudyk is hysterical, Marsden is annoying.  Only Dinklage walks away unscathed, but then again, he did this all once before.

A lot of the blame should also be heaped onto once-great director Neil LaBute (In the Company of Men, Your Friends and Neighbors) who proves to be as inept at directing slapstick as he did at directing horror (The Wicker Man, another godawful remake), and suspense (Lakeview Terrace).  Hopefully he can rectify this film-directing career freefall.

There's nothing more unendurable than sitting through a comedy without laughs.  Sadly, Death at a Funeral is one of those dire examples.  The most galling thing about the decision to even make this movie is the fact that it was assumed American audiences simply wouldn't "get it" when it came to understanding or appreciating the British original.  For all of those viewers out there who only saw this travesty: please find and watch the original 2007 version.  Trust me, you'd me amazed at the difference.