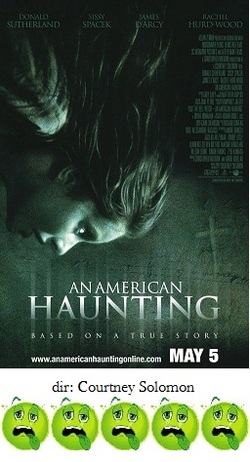 An American Haunting looks good and has a talented, capable cast, but the lousy script completely undermines any positive qualities there may have been.

Although An American Haunting is supposed to be based on a true story, the likelihood that anything depicted on screen really happened is highly suspect.  Supposedly, this is the only documented case of an American's death as a result from paranormal influences.  Set in the early 19th century, the movie follows the family of Sissy Spacek and Donald Sutherland who are involved in a trumped up land dispute against a creepy woman suspected of witchcraft (and known as the Bell Witch).  So, the witch woman loses her case and then she curses Spacek and Sutherland.  This curse sets in motion a series of ghostly encounters and demonic possessions that seem to target their eldest daughter.

The bulk of An American Haunting is devoted to the torments of the daughter and the disintegration of her family.  There are several scenes of creepy footsteps and shadows and startling physical assaults against the girl.  Although these moments aren't exactly original, they are done well enough to evoke the proper gothic-style mood that movies like this require.  Both the lighting and sound design are top-notch, too.  So what is the problem, exactly?  The writing.

The movie builds and builds and builds, increasing the expectations of the viewer, and then...it collapses in cataclysmic fashion.  I imagine the real case the movie is based on was left fairly open-ended, after all, what 'proof' could there have been for documentarians circa 1812?  It's true this haunting was a well-known incident and there is much debate about what exactly was going on, but the movie makes the grave mistake of trying to provide an explanation.  And that explanation?  One of the cheapest, most creatively bankrupt endings in quite some time.  It's a solution that would send even the most nondiscriminating moviegoer howling with rage.  It completely contradicts everything that has occurred in the movie, thereby nullifying any reason for the movie to ever have been made.  No matter how effective much of An American Haunting has been up until this point, it's irrelevent.  Even more moronic is the present-day framing device used to tell the tale, that is probably the most unnecessary example of such a device ever committed to film.