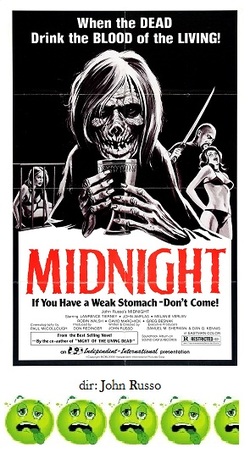 Horror fans are probably familiar with the name John Russo. After all, this was the guy who co-wrote the screenplay for the immortal Night of the Living Dead, yet, for the rest of his career Russo tried to live up to that credit. And he failed again and again and again. Looking at the work, both in writing (novels as well as screenplays) and directing, Russo's done since Living Dead, it becomes quite evident that the key to that film's success lies solely in the hands of director George Romero. Look no further than Midnight to prove that hypothesis.

Even in the heyday of the slasher-film era, Midnight stands as a completely disastrous affair. Based on his own novel, Russo wrote the screenplay and directed this ill-conceived tale of a family of Satan-worshipping blood drinkers.  It is just filled with examples of bad judgement and lack of talent.

The film starts promisingly enough. In the prologue, a woman and her four children are walking through the hills and come upon a young girl whose foot is caught in a bear-trap, or as they say, a 'demon-trap'. They knock the girl unconscious, take her back to their house in the woods, and then perform a Satanic ritual sacrifice. Next we get a pretty nifty credits sequence which leads to a teenage girl who is making a confession to priest. She's a lapsed Catholic and is trying to come back to the fold.

So far, so good. But the film totally disintegrates from here on out. Rarely has laughability, tedium and head-scratching ineptitude been mixed together so completely. Anyway, the Catholic girl is Nancy. After Nancy is nearly raped by her step-father, she packs a suitcase and hitches a ride with two college guys to Florida. After the threesome steal some groceries and ditch the cops by driving on a creepy dirt road in the middle of nowhere, they see a strange, laughing, fat man carrying a bundle. Even though they were warned that many unexplained murders have taken place in the area, they naturally decide these woods would be perfect to set up camp. Not too stupid.

The next morning, while Nancy is walking in the woods, two police officers approach the guys and ask where the girl is. The officers handcuff then execute them, capture Nancy and take her to a house in the woods. Once inside, she witnesses the creepy fat guy from earlier slicing the heads off the two REAL officers right before the, now obviously, phony officers lock her in an animal cage next to another girl.  No prizes guessing that the fat guy and the two phony officers, along with a woman, are now the grown children from the prologue. And of course they keep the rotting corpse of their mother in one of the bedrooms. And of course, the girls are captured to become sacrifices. Will our heroine Nancy escape?

One of big problems with "Midnight" is pacing. There is only about 45 minutes worth of material here and it is stretched to feature length, with lots of padding. It is amazingly inert. The events leading up to the deaths of the college boys takes up half of the movie itself. Every single scene takes up twice as much time as it needs to. It makes for a monotonous and coma-inducing experience.

The acting, with the possible exception of Melanie Verlin as Nancy, is atrocious. Bad acting is to be expected, but some of the performances here are hard to believe. There is a preacher in the film who gives one of the most uncomfortable performances with the stiffest line readings ever. Also, the scene with the attempted rape of Nancy by her step-father will illicit peals of laughter. He's on top of her and she knocks him out by bashing him on the head with a radio; however, the 'bashing' is overstating it really, Nancy kind of 'taps' him on the head with the radio and he grunts in pain and falls unconscious. Truly hilarious.

Tom Savini once again provides the bloody make-up, but even for gore-hounds, there isn't much to see here, just a beheading, several nasty throat slashings and one stabbing where the knife apparently didn't actually pierce the man's shirt, but he dies anyway, somehow forgetting to bleed in the process.

Russo's direction doesn't help matters much either. What went into his decision to use what sounds like a rejected porno-movie score? Or actually hire someone to write the theme song, "After Midnight," which is played over and over again. Or didn't someone, somewhere teach him about camera placement, depth of field or the proper use of angles? This is student-filmmaking at best. As for the screenplay, I'm not sure what Russo was doing by including the Catholicism subtext or some puerile attempts at depicting racism, but whatever it is, none of it is followed through and actually reeks, at times, of offensive exploitation.  Russo followed this up with The Majorettes (also based on one of his novels, and it's supposedly even worse) and the godawful new footage added to the anniversary DVD release of Night of the Living Dead, for which he should be shot on sight.