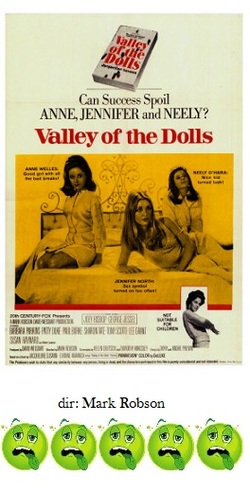 It shouldn't come as a surprise that Jacqueline Susann's bestselling potboiler was turned into a bad movie.  The surprise is that the film version of that book, Valley of the Dolls, is one of the funniest, unintentional comedies ever committed to celluloid.  It's bad, but man is it a riot!

"Dolls", in this case, is another name for pills, and we watch with glee as they wreak havoc on a trio of lovely young ladies.  We are told, "You have to climb Mt. Everest to reach the Valley of the Dolls," but we aren't told what a preciptious and laughable plunge down you have to take to get there.

First up is the ravishing and obnoxiously wholesome Barbara Parkins, a small town girl who makes her way to New York City in order to become...a secretary.  Great ambition, that.  Anyway, she finds herself in an on-again-off-again affair with talent mogul Paul Burke.  The will-they-or-won't-they get married question is presented as the movie's big conflict.  Almost by accident, Parkins finds herself becoming a world famous fashion model and starts taking pills to cope with the stresses of her love life.

And last, but certainly not least, is Patty Duke as a singing and dancing star named Neely O'Hara.  If there were Olympic gold medals given for Worst Overacting By a Former Oscar Winner, Duke would win hands down.  She sings, she dances, she screams, she growls, she bellows, she cries, she pops uppers like M & Ms, she destroys all the men in her life; everything she does and says is big Big BIG.  In order to dry out, Duke even gets committed to the same sanitarium as Scotti and performs for all of her fellow patients a big singing number (and Scotti keels over dead right at the song's end).  Duke makes it back to the top only to lose it all again on pills and booze and winds up wallowing in an alley screaming the names of all of the other characters destroyed, shrieking to the heavens, "NEELY O'HARA!!!!!!"

We also can't forget Susan Hayward (a role originally to be played by Judy Garland who dropped out) as the tough, veteran star with a grudge against Duke.  They carp at each other throughout the movie until the showdown in the ladies room where Duke yanks off Hayward's wig and tries to flush it down the toilet, cackling wildly.  Of the many (many, many, many) awful songs performed throughout Valley of the Dolls, Hayward gets the worst one ("I'll Plant My Own Tree").

Valley of the Dolls is the ultimate touchstone to which all future starlet vehicles will always be compared.  Even the 1970 spoof, Beyond the Valley of the Dolls (written by film critic Roger Ebert), doesn't quite hit the heights of hilarity on display here (it's fun, too, but for different reasons).  This is an audience participation movie (think The Rocky Horror Picture Show) just waiting to be discovered.