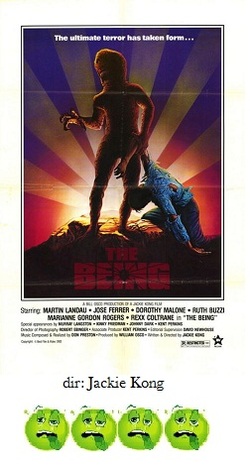 One of the most frustrating things about many creature-features like The Being is their complete lack of logic.  Just because the monster is...well...a monster, doesn't mean there shouldn't be inherent rules of which it should follow.

The Being takes place in a small Idaho town where there is a massive nuclear waste facility that uses the town's water supply as a dump.  Martin Landau is on hand as the scientist-spokesman who goes on the local TV station to declare that the water is perfectly safe.  At the same time, a gelatinous creature starts a rampage, dismembering several patrons at the local drive-in.  It seems that everyday, people are coming up missing, yet the only one who appears to make any fuss about it is the local D.J., who intones a daily count of the number of citizens who vanish.

Anyway, come to find out, the first missing person was a young boy who disappeared at the nuclear dumpsite.  Could it be that the carnivorous creature is actually the young lad, now mutated beyond recognition?  What do you think?  Eventually Landau changes his tune and teams up with detective Rexx Coltrane to track it down and kill it.

So much for the plot.  Why does The Being fail?  Because of the complete lack of discipline within the script.  This creature has no real physical laws of which it must follow.  Basically, it can do anything to anyone anywhere at any time.  It can kill many different people who are all on different sides of town nearly simultaneously.  Despite being about six feet tall, at times, it changes into liquid and can seep through the vents of a parked car to get to the folks inside.  At other times it can't.  Sometimes it's very, very fast; other times it's agonizingly slow.  Light hurts it sometimes.  Sometimes not.  At one point, it gets locked in a walk-in freezer without windows, but then it  gets out.  How?  We never know.  It just does.

All of which begs the question:  How are Landau and Coltrane able to lock themselves in a warehouse with it in order to have the final battle to the death?  Because the script says so.  It should just be able to dig a hole (we know it can do this) or jump through any of the many available windows.  All of these unaddressed consistencies only serve to undermine any real sense of excitement or tension.  This is the same complaint that could be levied against the entire film.

On the plus side, the kills are entertainingly gruesome and the creature, once we finally get a good look at it, is pretty inventively horrifying.  Coltrane is an emotionless lump of an actor, but the rest of the cast, comprised of many Hollywood veterans (along with Landau are Jose Ferrer, Ruth Buzzi and Dorothy Malone) are entertaining to watch.

If you just need a good gore fix, The Being will work quite nicely.  But if you are wanting any other admirable qualities in a horror movie, ya know, like brains, scares or originality, then you can safely skip it.