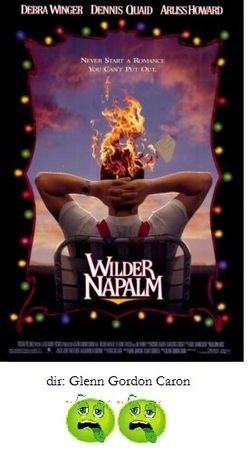 How do ordinarily talented performers and directors all have unanimous lapses in judgment when it comes to a certain project? Case in point, Wilder Napalm, starring Debra Winger, Dennis Quaid, and Arliss Howard, and directed by Glenn Gordon Caron (who before this, directed the marvelous Clean and Sober but has since been doing dreck like Love Affair and Picture Perfect ).

Essentially, Wilder Napalm is a simple love triangle where a woman gets between the relationship of two brothers. To juice up this idea, the screenwriter Vince Gilligan,  had the jaw-dropping notion to make the woman a pyromaniac, and the brothers both gifted with pyrokenesis, the ability to telepathically set fires. Which of course, is just an excuse to burn stuff up real good.

Winger is the very quirky free-spirit who is approaching the final days of her house arrest for arson. Howard is Wilder, her milquetoast husband who faithfully attends his job as a photomat operator in a desolate strip-mall. He can induce fire with the power of his mind, but doesn't use it because as a young boy he and his brother accidently burned a homeless man to death. Apparantly, there was a falling out between Howard and his brother, Dennis Quaid, which left Howard bald and scarred from his hair being set aflame. Quaid is a pyrokenetic circus clown who's show is coming back to thier hometown, and he wants Winger back!

This strange movie just screams "I wanna be quirky! I wanna be a cult film!" It's so filled with strange and off-beat characters that the filmmakers forgot one very vital thing: they forgot to make the movie interesting.
Instead we are left with scene after scene of bickering, between Winger and Howard, Winger and Quaid, Quaid and Howard, and none of it amounts to anything. One argument scene between Winger and Howard is composed of Howard getting on his riding lawnmower and mowing a circle around their trailer while Winger stands on the roof and screams his name over...and over....for hours....on end. At one point Quaid seduces Winger while playing miniature golf. They get so hot and bothered putting together that the whole park burns to the ground. You'd think the local townsfolk would run screaming in the other direction when any of these three approached, given their history.

Anyway, the whole thing comes to a head with a final fiery showdown between the brothers to win Winger's hand with flames shooting left and right and everything in sight burning to the ground. Ah, love!