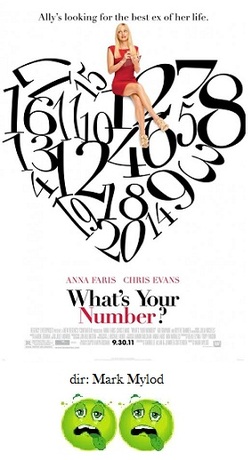 I'm a big fan of Anna Faris.  She's really the only reason I bothered with watching What's Your Number?, but even her great comic talents can't bolster or overcome the lackluster script and flaccid direction on display here.

Faris is such an energetic and fearless performer who works well with spoof (the Scary Movie series), broad comedy (The House Bunny) and drama (May), and she tries hard to energize this movie, but it fails her.  She stars as a young woman who can't find a stable relationship, but when she takes a magazine quiz she finds out that she has reached the limit of the number of sexual partners that would still allow her to find 'the one.'  How does she rectify her predicament?  By going through all of her exes to find out which one she'll eventually marry.  She also befriends the hunky neighbor (Chris Evans) who helps her track down all of her old boyfriends.  No prizes given to anyone who will easily figure out how this movie ends.

There is so much potential for a very wicked 21st century dating comedy, but the film makers lose their nerve.  Every time the movie seems ready to break out into something akin to Bridesmaids or The 40 Year-Old Virgin, the reigns are pulled back to make something 'nice.'  You can almost see Faris vibrating with tension, ready and willing to 'go there,' unfortunately, there's no 'there' to go to.

The results in What's Your Number? aren't bad, exactly, just blah.  There are a couple of laughs to be had, but they were completely used up in the film's trailer; so, essentially, most of the potential audience have already seen the handful of good moments.

There are certainly more painful 106 minute films out there, but is that really a recommendation?  Hopefully, in the future, someone will write that huge breakout success Anna Faris so richly deserves.  What's Your Number? definitely wasn't it.