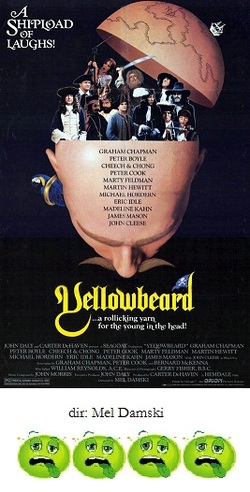 When I was 12, I thought it was a laugh riot. Now, it's more like a riot of comic misfortune. It's truly sad, because Yellowbeard is chock full of gifted comedians in a story with lots of promise; but when a movie can star Graham Chapman, John Cleese, Madeline Kahn, Marty Feldman, Eric Idle, Peter Boyle, James Mason, and Cheech & Chong and still barely generate even a mere handful of disheartening laughs, you know you're in some serious trouble.

As can be inferred by the title, Yellowbeard is an attempt at a comedic pirate movie. Chapman (of Monty Python), stars as the titular swashbuckler, who is bloodthirsty and impervious to pain, and that's basically the whole joke as far as his character goes. Anyway, he is imprisoned for 20 years for pirating but escapes after his sentence is extended, and now he intends to recover his stolen treasure, but first he must find the map.  The map, has actually been tattooed onto the scalp of his (now adult) son, whom was the product of the rape of Madeline Kahn, (her character is named Mrs. Beard, funny no?).

And that's basically all there is to it. But the film piles on so many characters that it's nearly impossible to keep anything straight, plotwise. Granted, in a supposed zany comedy such as this one, plot and story are not exactly important, but if there aren't any laughs, then the plot is all an audience has to hang onto.

The basic problem with the comedy in Yellowbeard it's piitched at such a juvenile level, and this coming from such comic geniuses is very depressing indeed. For instance, along with Yellowbeard's imperviousness to pain, and the fact that Kahn is called 'Mrs. Beard', Cleese is blind and therefore milks it for tiresome blindness jokes, Boyle has a hookhand and relies on hookhand jokes, Feldman is short, Chong has a lisp etc. etc. etc. You see where I'm coming from? Once the character trait has been established, that's all the comedic heft the performers attempt to give. It's just pure laziness. Only Madeline Kahn makes any headway into actually delivering laughs, but maybe it's because I've always thought she was brilliant no matter what she did.

Yes, all the comedy in Yellowbeard is of the tiresome physical kind. Along with the character traits listed above, we have a sailor whose foot is nailed to the deck of the ship, a little girl who throws poop at people (in fact, too many excrement jokes to mention), lots of konks on the head, badly choreographed swordfights, and other jokes revolved around bad smells and bodily substances.  A comedy extravaganza "Yellowbeard" definitely is not. Obviously all of the energy and money was put into hiring talent and set design, and little thought was put into the screenplay. I am now going to spoil everything by giving away the only decent lines in the whole film: Mrs. Beard: "You have a son!" Yellowbeard: "A son?" Mrs. Beard: "Yes a son, the fruit of your loins." Yellowbeard: "The only thing my loins has got is lice. And I'm proud of 'em!"

There, now you don't have to suffer through the whole movie yourself. Don't you feel better now?