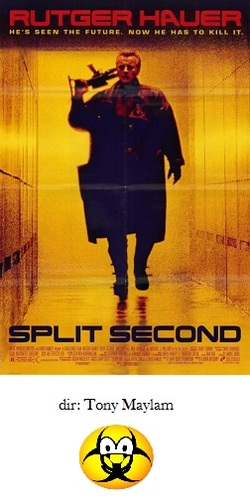 I have watched the dismal Split Second twice now and I am still at a loss as to what this mess was supposed to accomplish.  When it's not wallowing in sci-fi cliches it simply sits there, inert, without a pulse or a functioning brain cell anywhere in evidence.

Beyond this cursory description of the plot there just isn't much else to tell.  Hauer acts embalmed as he goes from crime scene to crime scene where the bodies of the now heartless citizens await.  The only other characters of note are Alastair Duncan as Hauer's new partner who is (of course) his polar opposite (Duncan wears suits and ties while Hauer sports leather coats and boots) and Kim Catrall as Hauer's bad-girl love interest.

Now, all of these elements may not have made for a great movie, but they could've been put together to make a reasonably entertaining one.  Great action, make-up, special effects or, at the very least, a palpable sense of atmosphere can go a long way in saving a doomed project.  Split Second has none of these.  Doomed is an apt word to describe it all.  The depressed-looking actors perform as if they were all forced to at gunpoint, the sets are all dank as if covered in a layer of mildew, the creature itself is unremarkable, and the pace is glacial.  Virtually nothing happens in Split Second and all of that nothing makes for an agonizing 90 minutes.

Slasher fans may recognize the name of the director, Tony Maylam.  He directed 1981's The Burning, one of the best slashers to come along in the backwash of Friday the 13th.  Maylam was able to take familiar elements and come up with something that felt fresh and effective.  Unfortunately, he couldn't do anything with this junk, which was obviously written by screenwriter Gary Scott Thompson while sitting on the toilet one morning.

Maybe someone out there may find some entertainment value in Split Second but those people must never have seen a movie before.  If you want a sci-fi double feature from hell, watch Split Second followed by the similar, and even worse, Adrenalin: Fear the Rush, but, hopefully, most sane individuals will stay far, far away.