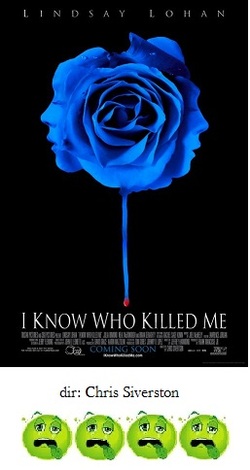 When the garbled thriller I Know Who Killed Me finally got a release right at the height of star Lindsay Lohan's personal troubles, critics everywhere stomped on it with as much force as they could muster.  Seriously, you would've thought this movie was a legitimate sign of the apocalypse or something.

I'm not here to defend it, exactly.  It's a bad movie; there's just no way around it.  Razzie wins aside, I Know Who Killed Me is not the worst movie to appear on movie screens in 2007.  Would you really rather watch Daddy Day Camp, Georgia Rule, Epic Movie, Who's Your Caddy? or Norbit?  I thought not.

Anyway, what is this head-scratcher about?  Let's see if I can make some sense of it.  Lohan stars as Aubrey, your typical high school girl who, early in the film, is abducted and tortured by an unknown assailant.  This guy gets his jollies by doing such things as freezing Lohan's fingers before cutting them off.  Fun.  Instead of killing her though, he tosses her in the woods where she is found, much to the relief of her fretful parents Julia Ormond and Neal McDonough.  The only problem is, once Lohan awakens in the hospital, she claims to not be this Aubrey, but someone else entirely.  Amnesia?  Repressed memories?  If only.

No, Lohan claims to be a chick named Dakota who's so badass she pole-dances at a bar at night.  Alas, fully clothed.  As all strippers hired at sleazy clubs do.  While her parents fret over her denials over her own identity, Lohan periodically loses a limb.  Yeah.  Don't ask.  Like, suddenly her leg vanishes into thin air.  I don't get it either.

Finally her parents and the police figure out that Lohan actually is a pair of twins, but it's Lohan-as-Dakota who tries to solve the mystery and find the mean torturer who still has Lohan-as-Aubrey imprisoned.  Which she does.  The end.  WTF?  The script for I Know Who Killed Me was in desperate need of many, many serious rewrites before scene one was ever filmed.  The movie actually begins well enough, but once Lohan-as-Dakota shows up, all coherence, logic, or lucidity is tossed out the window.  Nothing about the 'mystery' here makes even one ounce of sense.

Lohan basically received the majority of the blame for I Know Who Killed Me, but her acting is the least of the movie's problems.  She is perfectly fine as is the rest of the cast, it's just that they are all at sea in this unfilmable script accompanied by the stilted direction of Chris Siverston and the hash editor Lawrence Jordan made of whatever footage he was provided with in a desperate attempt to bring in some clarity.

I Know Who Killed Me was, justifiably, one of the worst movies of 2007, but it was hardly the affront to the entire history of filmdom many would have you believe.  It's bad, sure, but just forgettably so.