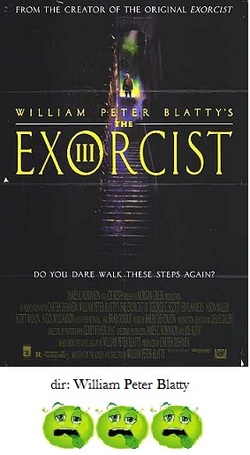 William Peter Blatty, the man who wrote the immortal novel The Exorcist from which the classic film was made, proved that he could make amost as bad a sequel to his own material, in this case, his novel Legion, as those that made the laughably insane The Exorcist II: The Heretic.

The Exorcist III is not quite as inexusably horrid as Exorcist II, but it's also not nearly as funny or entertaining either. It does come close a time or two, what with the truly bad acting, loopily confusing plot and the unintentional hilarious moments derived from botched attempts at terror. To be fair, The Exorcist III also has two moments of true horror perfection, but they are marooned in a morass of miscalculations.

So, what's this all about, you ask? Well, let's see if I can help. The film stars aging ham George C. Scott who plays Lt. Bill Kinderman (a character played by Lee J. Cobb in the original The Exorcist) who is investigating the murder/ritual sacrifice of a young black boy whose headless body is found crucified on a couple of rowing oars. At the same time, it is the anniversary of the death of Father Damian Karras (who you may remember jumped to his death, in the original film).

Just as Scott begins his investigation, a priest is found murdered in his confessional booth. The story then progresses to the local Christian hospital where a priest friend of Scott's is having minor surgery, and shortly thereafter, he too is also killed by having all his blood drained from his body. There is also a mysterious stranger in one of the solitary confinement cells who may know something about the crimes.  As bodies continue to pile up, will Scott discover the identity of this stranger and stop the murders?

Basically, I've parboiled the movie down to a more understandable whole. But believe me when I say, this is one confusing mess. You see, the murders mimic those of the notorious "Gemini Killer" from years ago. The mysterious stranger looks uncannily like Father Karras, but Karras is dead...right? Characters appear and disappear and are killed at random intervals. It also seems that the elderly patients of the mental wing of the hospital sometimes spring to animated life and are the only ones nearby during the murders. There is also another priest called Father Morning, whose character is given nothing to do except sit wistfully in his room for one scene and then show up for the finale. Who is he? Who knows.

Anyway,  this is the gist (or so I've been told by the folks who've actually read Legion, because lord knows the details in the film are so murky), as punishment for killing himself, the demon flees Karras' body and replaces it with the soul of the Gemini Killer who was executed at the same time. Karras, now brain-damaged from the fall, is picked up as a vagrant and whisked to the mental hospital where he has been mending himself over the last 15 years or so. At times the Gemini Killer's soul leaps out of his body and inhabits some of the elderly patients who carry out his murderous deeds. Whatever. It might have worked had this body jumping idea hadn't already been done in Shocker a year or so earlier.

Blatty totally botches this assignment, and the awful performance by George C. Scott doesn't help matters either. I've rarely scene this much screen chewing since the heyday of Rod Steiger.  He screams and blusters and mumbles the mumbo-jumbo dialogue, taking people's heads off every time he speaks. We are given such scenes as a possessed elderly woman crawling around on the ceiling, which elicits peals of laughter; Karras/Gemini (Karras is still played by Jason Miller and the Gemini is Brad Dourif) whose face changes depending on who's talking despite the fact none of the characters react to it. There is also a dream sequence with Scott walking around a train station inhabited by angels, played by the likes of Samuel L. Jackson and Fabio, and meeting the young murdered boy with this cheery greeting while smiling: "I'm so sorry you mere murdered, Thomas. We all miss you."

Blatty somehow (accidentally, I'm sure) provides two truly scary moments. One involves the confessional booth scene where the first priest is murdered: the seemingly kindly elderly voice on the other side of the sliding door begins benignly enough until it culminates into a truly, horrificly violent confession. The other is a simple scene in the hospital where a nurse is making her rounds that is filmed in long unbroken shot with a static camera. This scene made me leap out of my skin, no joke. But, alas and alack.

The finale comes at it must, with Scott and Father Morning attempting to cast the Gemini Killer out of Karras' body. There is lightning, and demons, and smoke and supernatural growling, then Morning is levitated and stuck to the ceiling where his skin is peeled off, then Scott shoots Karras, and Washington D.C.'s demon population is left one short.

Take plenty of Advil before a screening of The Exorcist III. I can't be blamed if the curiousity of watching this causes a migraine. If it happened to me, it could happen to you too.