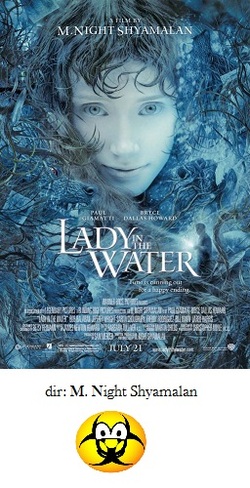 There had to be someone who read the script for Lady in the Water and levelled with writer/director M. Night Shyamalan that there wasn't a filmable idea to be found anywhere in its 120+ pages.  This is about as close to a director's filmed suicide note as you're likely to find.

After 1999's The Sixth Sense, Shyamalan basically got the cred and power to make any movie he wanted.  It's been a slow slide ever since.  Unbreakable was interesting and moody, and Signs, despite its detractors, was engaging and tense.  Then came The Village, which garnered his harshest reviews up to then.  A word to anyone who thought that movie was crap, "You ain't seen nothin' yet."  Lady in the Water is such a garbled, lazy, pretentious piece of excrement it makes Shyamalan's The Last Airbender seem like Lord of the Rings.

The movie takes place at an apartment complex that is maintained by Paul Giamatti, and it is a rather ordinary place...that is until Bryce Dallas Howard materializes in the swimming pool.  You see, Howard isn't your ordinary, run-of-the-mill, mysterious naked chick having a late night skinny dip; no, she's a narf.  A what?  A narf, silly.  Essentially, a narf is just some sort of fantastical creature dreamed up by Shyamalan.  Anyway, Howard the narf needs to get back to her 'Blue World,' and can only do so with the help of Giamatti and the other residents.  They must work quickly because the scrunts are after her.  The what?  The scrunts!  Duh!  You see, scrunts are strange dog-like creatures with fur that makes them blend in with the grass and foliage...and they eat narfs, I guess.  Will the happy apartment folk be able to get Howard the narf back to Blue World before the scrunts track her down?

I must admit, I can't even write about this plot without rolling my eyes and snickering.  Maybe....just maybe, this story (oh yeah, I almost forgot to mention that Howard the narf is named 'Story' by Giamatti...how nauseating) might have worked had the script even bothered with trying to explain all of this nonsense in a creative way.  But, no.  Shyamalan uses the hoary device of having a convenient character, in this case, an elderly Chinese lady, who just happens to know everything anyone could ever want to know about narfs, scrunts, etc., so anytime Giamatti needs a little helpful advice or information, this Chinese lady is hauled out to provide exposition, and then is shuttled back out of the way.  It would also have helped if the script were paced a little faster....well, a lot faster.  It takes so long to get where its going that I'm amazed that there weren't stories of mass suicides in theatres nationwide.

Who in the world was Lady in the Water made for?  Kids?  No, it's far too mannered and slow to keep their attention (despite the fact that the movie was made as kind of a fairy tale movie for Shyamalan's own children).  Adults?  No, anyone over the age of 10 will be gagging on the nonsensical plot and such laughable scenes as the one where Giamatti takes a swim in the pool, pulls open a drain cover, and finds himself in some magical underwater grotto.  Hmm....wonder how anyone missed that before?  It's a film that was made for an audience that didn't exist.

Shyamalan continues to circle the drain; after Lady in the Water he presented audiences with the atmospheric and silly The Happening and the disastrous The Last Airbender.  I would ask, "Can he sink any lower?" but I'm afraid the answer is probably a resounding "You betcha!"