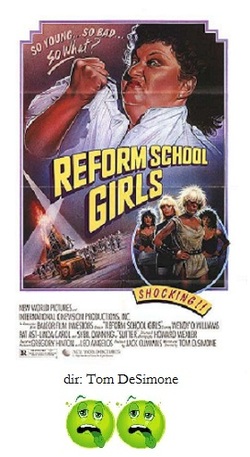 Films like Reform School Girls are very hard to rate. On one hand, this women-in-prison film IS a bad movie filled with laughable dialogue, wretched acting and a preposterously unbelievable plot. On the other hand, Reform School Girls already knows that; therefore, it pulls out all the stops and doesn't take itself seriously, verging on satire. All I know is, I had a goofy grin on my face the whole time. Say what you want, Reform School Girls is lots of fun.

The opening scene has our heroine, Jenny, involved in a botched holdup. Of course she is caught and is sentenced to Pridemore Reform School for three years. Now, the scene with the judge is the first clue to the satirical intentions of this movie.  At the sentencing, he says "Young lady, if you weren't a juvenile, I'd throw the book at you!" You see, the actress playing Jenny is easily 25 years old or more. So, if she's sentenced to three years in a juvenile facility, her character must be around 15.  In fact, once Jenny arrives at Pridemore, she actually looks younger than the rest of the inmates.

Anyway, Jenny meets Edna (played to the hilt by Pat Ast), the second in command of Pridemore. Edna is a giant of a woman who is so evil, she cackles everytime she speaks, snarls, glares and basically has smoke pouring out of her nostrils at every turn. There is also Warden Sutter (Sybil Danning, who graduated from being the Jenny character in these types of films to now being the warden, that's career advancement for you) who dresses in starched black military uniforms and carries a riding crop.

Once Jenny arrives at her dorm, try not to cackle as we see the other "juvenile inmates", all twenty-something porkchops parading around wearing only designer-wear bras and panties. At this point we meet Charlie, the inmate who runs the dorm and basically causes trouble for Jenny. Charlie is played by none other than the late Wendy O. Williams. A few words about Wendy O. You may or may not remember her as the front-woman for the metal band The Plasmatics, anyway, at the time this movie was made, she was easily pushing 30ish or older, and, even though, she had the body of a buxom sex goddess, she had a face that could stop a train and the voice of 6 pack-a-day smoker.  Needless to say Charlie and Jenny don't hit it off. So, of course, there's a scantily clad cat-fight every few minutes or so.

Will Jenny survive Pridemore? Will the abuse and torture at the hands of Edna and Warden Sutter be exposed? Does it really matter?

Reform School Girls is purely tongue-in-cheek cheesecake. All of the women's prison movie cliches are thrown into the blender and pureed. We have abuse by firehose, solitary confinement, work-detail torture, a studly hired-hand for Jenny to be seduced by, the death on an innocent inmate, lesbian overtones, a prison riot finale and, of course, lots and lots of skin. This film is a veritable boob bonanza.  But there is also delicious dialogue that had me giggling throughout, such as this warning from Edna to the girls during lights out: "Keep your fingers above the sheets, we only change them once a week!" or Sutter telling Edna "You need to put on your 'f*ck you' boots and start kicking!" and, of course, Charlie telling a waifish inmate "You'll forget about guys after you've been in here awhile. I'm the only stud you'll need!"

Reform School Girls is pure trash, yes, but that's all it was aiming for. And riotous trash it is.