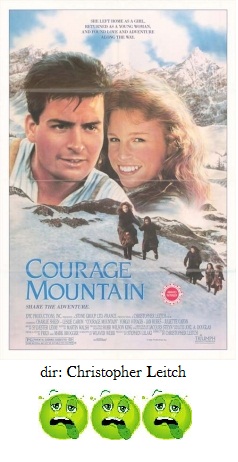 Betcha didn't know that they actually filmed an original sequel to the beloved story of Heidi of the Swiss Alps.  And why didn't you know this?  Because the sequel, entitled Courage Mountain, is just so much sickly-sweet goat dung.

Courage Mountain begins with plucky Juliette Caton, this incarnation's Heidi, living a happy little life with Grandfather, Jan Rubes,  up in the Alps, feeding the farm animals and crushing on the older, teenage (?) Charlie Sheen, who doesn't even bother trying to adapt any kind of accent.  Anyway, we are informed that Heidi has received a large inheritance and has decided she wants to attend an exclusive Austrian boarding school.  Why?  We never really know.  Of course, when she arrives she doesn't fit in, being far too rural for these other rich, uppity classmates, even going so far as to....gasp!....take a bath while naked!  The horror.

But none of Charles Dickens's characters have anything on this Heidi.  See, no sooner has she started to find a group of friends than we find out World War I has broken out and a cavalcade of German soldiers take over the school and turn it into a military bunker.  Next, the girls get shipped off into the care of an odious husband and wife who take as many child refugees as they can, lock them up in a dank underground factory, dress them in gray rags, and feed them stale bread while they eat seven-course dinners by candlelight in full view of the oppressed tykes.  Sad, sad Heidi.

So, she takes a group of girls and escapes, leading them into the snow-capped peaks towards Switzerland.  Luckily, word gets down to Grandfather and Charlie Sheen about the girls' predicament, although it's unclear how, exactly, they seem to know all about what's going on to the last detail to be able to have Sheen gather his skis to head up a rescue, yet no one seemed all that concerned when Heidi was being forced into slave labor.  Oh well.  Anyway, Sheen finds the girls hunkered down in a cave and brings them back, and now Grandfather has a half-dozen girls to care for, but since Switzerland is neutral, everyone's so gosh-darned happy!

It's hard to figure out why Courage Mountain was a movie that anyone felt was necessary to tell.  The movie's not so much bad as it is completely useless and disposable.  The motivations of the film-makers were probably sincere, but somewhere along the way, instead of trying to create an interesting, original story, they started cribbing elements from every classic children's story ever written.  Every scene clumps along in predictable fashion, made ever so much more intolerable due to the nauseating cuteness of all of these beaming tots.

Where is a nice, bracing avalanche when you need one?