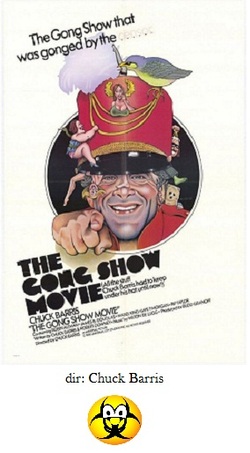 There are a few films that could truly be determined to be unwatchable. The Gong Show Movie, is one such film.  Like Jerry Springer's ill-fated Ringmaster years later, using a variety/talk show as grounds for making a feature film is truly one of the worst ideas Hollywood has ever attempted to cultivate.

Some may remember The Gong Show from the late 70s and early 80s. Basically it was a sort-of  talent show (I say "sort of" because the majority of contestants really didn't have any talent to speak of) where the contestants performed and then hoped that the celebrity judges didn't bang the giant gong and send them home. Chuck Barris was the host and didn't do much except to parade around in funny hats and laugh at the freaks on stage.

And, yes, Barris had the bright idea to make this concept into a movie. It's hard to discern who exactly would bankroll it; however, Barris's reported ties to the CIA and the mafia may have had something to do with it. So, anyway, Barris hired legendary no-talent Robert Downey Sr. to help co-write the so-called screenplay and then decided to take the directing reigns himself.

So, what do we have here? The Gong Show Movie is part fiction part documentary.  Most of the film deals with Barris's daily routine of being the show's creative force, and what a hard ordeal that is for him. The main running joke is that, wherever Barris goes, someone recognizes him and forces him to watch his/her impromptu audition. Yep, it isn't funny the first time it happens, and it certainly isn't funny the 20th time it happens, either.

These scenes are then interspersed with actual footage of The Gong Show. We get such sights as singers who can't sing, morbidly obese strippers, clumsy dancers, noxious comedians, and other oddities such as an elderly woman whose teeth fall out when she tries to sing, a man whose talent consists of singing like a chicken, another who makes faces on a pane of glass, and two nubile teenage girls who simply sit and suck on popsicles.

The characters in the film include Barris, his boring, supportive girlfriend, his twitchy producer who becomes apoplectic at some of the "acts" on stage, and, of course, featured appearances by Jaye P. Morgan, Pat McCormick and Jamie Farr, amongst others; they are the celebrity judges who 'gong' the freaks.

Basically, the film falls into a predictably awful rhythm: we get a day in Barris's life which consists of working on the show, he is then subsequently accosted by various people to get on the show, and then he goes home exhausted about why he does what he does and wonders if it is all worth it...then we get footage of the show itself and determine that, no, it most certainly is not worth it.  The attempts at humor are just jaw-droppingly horrible, and since Downey is a co-writer, that is to be expected (anyone who was misfortunate enough to see Downey's Hugo Pool or Too Much Sun will know what I'm talking about). We get a man who tells his story about a girlfriend of his who likes to eat cheese right before sex(!), two brothers who attempt to kill Barris because their mother got "gonged" on the show only to appear on the show themselves to be "gonged", and Jaye P. Morgan ripping off her top in un-hilarious exaltation.  The finale has Barris, who has had enough of his life, hightailing it to the deserts of Morocco, only to be followed by the entire cast who appear and sing a grand finale to coax him back to his fans. (I also forgot to mention that Barris sings many of the film's songs as well, making him a quadruple loser)

The Gong Show Movie is a deservedly forgotten curiousity. Thankfully, there have been few films like it, and luckily, it was such a critical and commercial flop that a sequel never materialized. If it had become a hit, can you imagine what would have come next?   Images of a possible The Tic Tac Dough Movie make one quiver with fear.