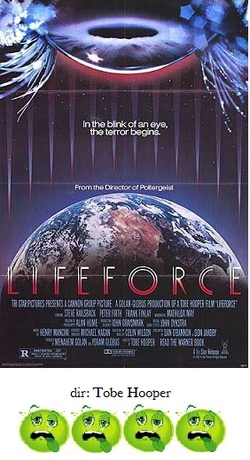 I know, I know, Tobe Hooper is considered a directing god for the creation of the original The Texas Chainsaw Massacre (1974), but in reality his track record is very shoddy.  The shambling sci-fi opus Lifeforce is more on par with the messy quality of most ot Hooper's usual work.

It's true Hooper directed the first Poltergeist (1982), but despite protestations to the contrary, producer Steven Spielberg's fingerprints are all over it.  With the exception of The Funhouse (1981), it's hard to find a single worthwhile film in Hooper's oeuvre, which is comprised of the jokey (The Texas Chainsaw Massacre 2, Eaten Alive), the underwhelming (Invaders From Mars), and the godawful (The Mangler).  He's had better luck with the television mini-series 'Salem's Lot.  And let's not forget that Hooper was actually replaced on  two different projects, The Dark (1979) and Venom (1981), but whether this was due to ineptitude or not is up for debate.

Lifeforce begins intriguingly enough, but it quickly disintegrates into a miasma of lazy storytelling, massive plot-holes and tragic performances.  Reliably awful Steve Railsback stars as a the leader of a team of astronauts who discover an alien spaceship travelling within the tail of Halley's Comet.  As they explore the interior of this ship they find hundreds of dessicated, bat-like creatures and, to their surprise, what looks to be three perfectly preserved, comatose, naked humans.  Anyway, ground control loses contact with the astronauts, and when the rescue ships arrive they find the evidence of a fire, several emaciated corpses and the humanoid creatures in the cargo bay.  The only survivor is, naturally, Railsback, who is found in an escape pod back on Earth.

Once the humanoids are brought down to a London research facility they awaken and immediately begin sucking the 'lifeforce' out of the people that they run across, leaving these victims as dried out husks which in turn 'awaken' two hours later to try and suck out new victims which sets off a massive life-sucking epidemic.  How or why any of this is happening is never really explained very clearly.  At certain times, the main humanoid, played by the lovely Mathilda May, is able to switch bodies, but sometimes not (this leads the movie's funniest moment when May has swapped bodies with Patrick Stewart and, while hypnotized- again, this sometimes works, sometimes not- pulls Railsback close for a kiss); the other two male humanoids appear to be killed by grenades, but we are told one lived (even though the screenplay tells us both of them were blown to smithereens).

Most aggravatingly of all is the fact that all of these details are expressed to the audience through Railsback's dialogue: every five minutes are so, he gravely overacts some essential plot point while bugging his eyes and sweating, whereupon another cast member will ask "How do you know that?!" which gets a reply of "I can feel it!" or "I see it in my mind!" or "I have a connection to her!" or other such lazy 'tell not show' storytelling devices.  Eventually, we discover that the creatures can be killed by a lead blade of some sort penetrating the 'life center' of the body.  Why? Why not?  The end has parts of London being overrun by life-suckers while a naked Railsback and May make out in a pool of light (the human 'lifeforce' is being sucked up to the spaceship through May) until Railsback impales himself and May on that convenient lead sword.

The massive story confusion would not be so terrible if the rest of Lifeforce weren't so absolutely boring.  The plot barely moves (until Railsback helps it along, that is), dragging on endlessly to a predictable mess of a finale.  There was a germ of a good idea here somewhere (based on the unknown novel The Space Vampires) but the script should never have been given a green light.  No amount of special effects and makeup, and there are a lot on hand here, can mask the fact that this movie has nothing to offer.