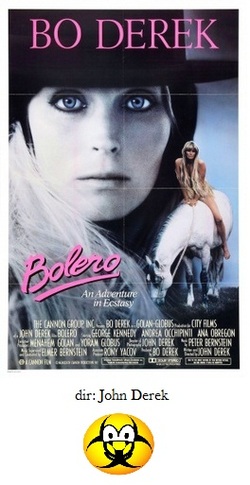 In 1984, Bolero caused some initial controversy over its explicit sexuality and was threatened with an X rating.  After it was finally released unrated, it was the laughing stock of 1984.  Essentially, it was the Showgirls of its day.

Bo Derek became a huge celebrity and fashion icon after the release of Blake Edwards's 1979 hit, 10, but, for whatever reason, she hitched her career to her talentless director husband and became a joke.  As bad as the Dereks Tarzan, the Ape Man was, Bolero was that much worse, if you can believe it.

Bo plays an early 20th century, virginial teenager (even though she looks and dresses like she just got back from a discotheque, circa 1984) fresh out of boarding school (!?!), who makes it her mission to lose that virginity and, as she says it, find "exstacy' (yes, this is how she spells it).  George Kennedy is also on hand as Bo's guardian, who simply to rolls his eyes whenever Bo winds up in a sticky situation.

Anyway, Bo first hooks up with a wealthy, middle-eastern sheik, but instead of losing her flower he just pours honey over her naked body and then passes out after smoking too much hash.  Poor Bo!  Next, she and a couple of gal pals (Ana Obregon and Olivia D'Abo) hotfoot it to Spain where Bo catches the eye of a champion bullfighter and Obregon falls for a Scotsman and becomes obsessed over what he wears under his kilt.

I suppose Bolero was intended to be taken seriously as erotica, but it is so sloppily made, hilariously written and acted by a cast who all seem to be ready to burst out laughing at any given turn.  One of the most glaring continuity errors in film history occurs during a scene where the sheik returns and abducts Bo, taking her by plane back to his palace.  Bo simply tells the sheik she can't go with him and, while still up in the plane, jumps out without benefit of a parachute.  The next scene has Bo lamenting the state of her love-life with her friends.  How'd she make it back to earth, exactly?  Who knows?  She's Bo!  She can do anything!

There are more laughs in Bolero than just about any comedy you could find.  Needless to say, Bolero was a critical and box-office bust and is widely considered one of the worst major studio films from the 80s.  John and Bo continued their wretched collaboration with Ghosts Can't Do It in 1989, but by then everyone stopped paying attention or caring.