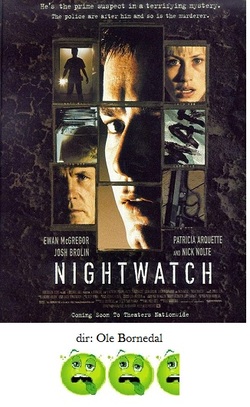 Nightwatch is a strange case, indeed. The opening scenes are completely ludicrous and unconvincing, the center passages are tense and engrossing, and the finale falls completely apart. It's like bad sex in a way: sloppy foreplay, some great boffing, but no climax. And how satisfying is that?

The flick stars Ewan McGregor as a law student who takes a job as a nightwatchman at the local morgue. There is a serial killer on the loose that preys on prostitutes and removes their eyes. The movie gets off on the wrong foot with the perposterous set up. You see, this morgue is one that can only exist in the movies, it's creepy, yes, but not convincing. Half of the lights don't work or have a short in them to cause intermittent flashing, and the funniest little addition has to be the holding area for the corpses. All of the bodies are lined up and have little pull-cords above them. These cords are for any corpse that decides to "wake up" so they can pull them to set an alarm off. What? No, I am not kidding. The nightwatchman whom McGregor is replacing keeps telling him not to worry about it, that "it will never happen". In fact, he repeats it so many times that, of course, you are basically counting down the seconds until, yes, the alarm DOES go off.  If you can get through all of this without laughing yourself silly, you've won half the battle.

Nightwatch also stars Josh Brolin as McGregor's best friend, Patricia Arquette is his girlfriend, and Nick Nolte is the detective who is trying to solve the case of the dead prostitutes. Anyway, hooker corpses keep piling up, and all of the evidence seems to point to McGregor. Is he being framed? The middle passages of this movie are pretty good, clues keep piling up, suspicion begins to fall on our hero, and various creepy goings on in the morgue all help sustain a decent amount of atmosphere and tension. But it's all for a rather lackluster and obvious finale.

The killer is revealed, no cool points for figuring it out, after all, the movie rule states that no name star is in a movie for no reason (Example: Cary Elwes in Kiss the Girls). And the finale in the morgue is just complete nonsense with characters getting themselves in trouble for doing stupid things. The killer has three, count em, three, people, who know who he (or she) is, all bound and helpless. Instead of just dispatching them, the killer leaves and allows them to escape many, many times. One character is handcuffed to a radiator and severs his own thumb to pull free.

Ultimately, Nightwatch is a disposable little thriller that needed some serious rewrites for its beginning and end. If a little care was given to these departments, there could've really be something here.