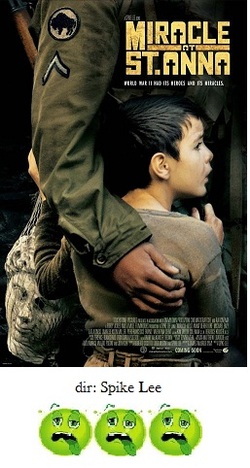 In response to his complaints that Clint Eastwood's films, Flags of Our Fathers and Letters From Iwo Jima, failed to present the contributions of African-American soldiers to our success in World War II, Spike Lee made Miracle at St. Anna.  Needless to say, we're still waiting for a good movie regarding this subject.

The expectations for Miracle at St. Anna were quite high.  After all, Lee is a very talented director who doesn't shy away from tackling serious material, but this time it didn't work.  Audiences and critics simply shrugged at the film.  Why?  Because it had underwritten characters, was acted by a cast in such a retro, mildly offensive style and was insanely, insufferably boring.

James McBride adapted his own novel for the screen, and all of the problems begin here.  Not a single one of the characters is given anything resembling a personality, except for a few who blather on in a minstrel-show style.  Truly.  All of them are depicted as being slow-witted, cowardly, or both.  It makes one wonder that if a white director had made this film whether there would've been some sort of politically-correct outcry.  These paper-thin characterizations are only upstaged by the flat, and sometimes awkward, dialogue.  Someone as seasoned as Lee should've been able to take one look at the screenplay and call for some extensive rewrites.

The simple plot follows a group of African-American soldiers as they find themselves trapped in a remote Italian village and must figure a way out without being killed by the Germans.  During their stay, they befriend a young boy and develop bonds with the villagers.  It's strange how emotionally ineffective all of these supposed wrenching scenes and scenarios are.  The boy's plight makes little impact on the audience, Valentina Cervi plays a beautiful villager, the only female character with significant screentime, but she is given nothing to do, and simpleton Omar Benson Miller lugs around the marble head of a statue, which may as well have "symbolism here" spray-painted on it.  And, yes, there is the completely unnecessary framing device, set in the present, that only serves to get the whole thing off on the wrong foot; any possible sympathy the audience may have brought is squandered away before 5 minutes of screen-time has passed.

Miracle at St. Anna slowly grinds away with static, uninteresting scene following static, uninteresting scene until it mercifully ends.  Spike Lee may have made worse movies than this, but even they made you feel something, no matter if that feeling was negative.  Miracle at St. Anna makes you feel nothing but lethargy, which is not the way to win any argument.