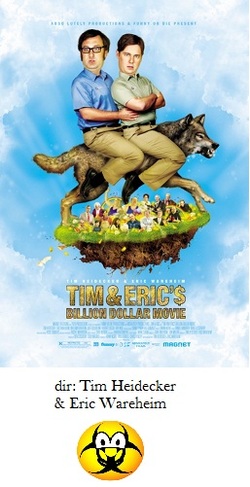 I suppose there are many out there who find the humor of Tim Heidecker and Eric Wareheim to be just their cup of tea.  After all, they've developed a cult following of sorts through their skits on 'Adult Swim.'  Personally, I've never seen them, but if their big screen debut, Tim & Eric's Billion Dollar Movie is any indication, I haven't missed anything.

Throughout the entire running time of Tim & Eric's Billion Dollar Movie,  I sat with a perplexed look on my face, my head tilted in the same manner as a dog's that has just heard a mysterious high-pitched noise.  I wanted to laugh, but all I kept thinking was, "Is this supposed to be funny?"

At the beginning of the movie, half-witted best buds Tim and Eric have just squandered a billion dollars while making a movie for the Schlaaang Corporation.  Unfortunately, their movie is only three minutes long and stars a Johnny Depp impersonator.  So, now, Tim and Eric must find a way to make a billion dollars in order to pay back the raging president of Schlaaang, Robert Loggia.  How?  Well, they see a TV ad featuring Will Ferrell that promises a billion dollars to anyone who can take over and manage the desolate Swallow Valley Mall.

To give a good conception of the humor level here, the mall is comprised of stores that range from one that specializes in swords where the manager is paid to NOT sell them, and another one that sells used toilet paper.  There is also the Shrim Healing Center which specializes in submerging clients in bathtubs full of fresh diarrhea.  Anyway, Tim and Eric are able to turn the mall around and defeat the evil Schlaaangs with the help of many of the store owners who pretty much all die in a hail of bullets.

Along with Loggia and Ferrell, other actors that make appearances including William Atherton as a Schlaaang toadie, Zach Galifanakis as the guy's 'spiritual advisor,' Jeff Goldblum in a commerical  promoting the Schlaaang Chair that has its own popcorn-maker, I.V and gynecological stirrups, Ray Wise as the Shrim Healing Center guru, and a tubercular John C. Reilly as the sickly mall maintenance supervisor.  What they found appealing in this script is anybody's guess.

All I can say is that I didn't laugh once.  Maybe one has to be a huge fan of Tim  and Eric already to find any enjoyment whatsoever in Tim & Eric's Billion Dollar Movie.  Could it be that I just don't 'get it'?  Possibly.  However, for me, Tim & Eric's Billion Dollar Movie is best described as like Freddy Got Fingered, only with less animal genitalia.  If that's your thing, have at it.