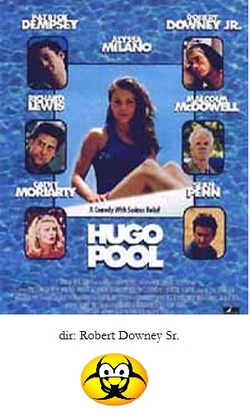 Have you ever seen a movie that actually caused you physical pain? Not some over the top, special effects extravaganza that's too loud or frenzily edited, but one that's so poorly written and tries it's darnedest to appear hip and cutting-edge that you feel like the director himself has reached out and pounded you with a sledgehammer? If not, then I present to you Hugo Pool. A mesmerizingly bad flick from legendary bad director Robert Downey. That would be Robert Downey Sr. not Jr.

Hugo Pool is the story of a day in the life of nubile pool cleaner Hugo, played by Alyssa Milano. To say that Milano can't act would be an understatement, but at least I can understand why she took the role; there are only so many Poison Ivy sequels a girl can do before she is typecast, after all.

The film follows Milano as she goes from house to house and pool to pool getting into many adventures and meeting lots of strange people. This movie is Downey's attempt at "Altman-esque" and it fails completely, with non-characters roaming around spewing horrendous dialogue. It's really mind-blowing to see such people as Sean Penn, Malcolm McDowell, Cathy Moriarty, Richard Lewis and Patrick Dempsey floundering around in this mess. They must have owed Downey something to agree to be in it.  Blackmail is the only explanation.

Since this movie is less plot-driven and must depend on dialogue, the only thing I can do is give examples of what I mean when I say that there are passages of dialogue that go over about as well as a brain seizure. Check out this exchange between McDowell, as Milano's father, and Penn, who is an unnamed hitchhiker:

McDowell: "I'm gonna go to the Colorado River. Pick up a load and come right back."

Penn: "Fine by me. I've never been to the Colorado River but I have an aunt in Denver."

McDowell: "Your shoes are exquisite."

Penn: "You're a gentleman. Few and far between."

In fact, McDowell and Penn have the worst exchanges of dialogue in recent memory. It even gets worse:

McDowell: "The reigning queen of the ring-dang-doo. Her majesty the B*tch of tin foil."

Penn: "If words could speak, I'd still have nothing to say."

McDowell actually says "ring-dang-doo" in about every other sentence, like when he says "There's something you gotta know. I'm off the snow. No more blow. The vodka had to go. But there's one thing I still do. That's the ring-dang-doo."

Everyone else has his or her choice moments as well. Patrick Dempsey's character has Lou Gherig's Disease, and is in a wheel chair with a speaking computer like Stephen Hawking. Anyway, he is propped in the back of Milano's truck to go along on pool cleaning adventures and, as in every other movie with Dempsey, there is a penis joke. Richard Lewis is some sort of mafia guy who wants his pool filled or else, and he tries to scare Milano with this bizarre threat: "I'm getting an image of you in a baby coffin, but you don't quite fit. I'm trying to stuff you back in but it ain't easy. And they bury you half in half out." Mmmm, scary.  Each line of dialogue is like a little stroke to the brain, until the grand mal finale where Milano falls in love with Dempsey, they have sex, and he dies. Boy what a mess. I didn't even mention a scene where McDowell gives a hand-puppet an injection of heroin, or Robert Downey Jr. who shows up with a hideous French accent and crashes a Jewish funeral, or Penn's blue leather shoes, or the quest to bet on a horse called 'Quirky Gait', or even the appearance of "Gong Show" host Chuck Barris. Or...oh who cares, anyway?

Hugo Pool is a mystery. Why did it get made? Who the hell put up the money for it? Why did these actors want to embarass themselves in a movie from the director of such 'gems' as Too Much Sun and Up the Academy?