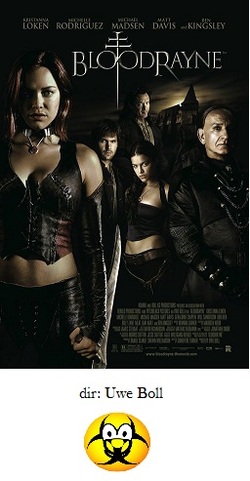 After suffering through this swill known as BloodRayne, based on the popular videogame series, twice, I still haven't a clue what it was about or what was going on at any given time.  Since it's directed by Uwe Boll, probably the worst director alive and working today, that shouldn't come as any surprise.

We do know that Kristanna Loken is Rayne, a half-human/half-vampire (called a Dhampir), who is enslaved by some sort of 18th century, Eastern European circus.  We also know that Ben Kingsley is some sort of vampire king who also happens to be Rayne's father (he raped her mother) and he wants her...dead...or, actually, this I don't know.  Anyway, there is also a band of warriors called the Brimstone Society led by sleepwalking Michael Madsen and the much too contemporary Michelle Rodriguez and Matt Davis.  Characters portrayed by Udo Kier and Billy Zane also make random appearances, but who they are and how they factor in the plot is a total mystery.  All that is required to know is that Loken must face Kingsley in the final battle, and anything in the script that happens before is completely irrelevant.

From here on out, you're on your own.  All I can say is there is a multitude of wretchedly staged battle scenes on very fake-looking sets where swords swing all over the place, limbs fly, blood spills, and it makes no difference whatsoever who wins or loses.  Loken lugs around a set of hookswords (her character's trademark weapon of choice), but she can barely lift them much of the time.  The choreography of the fights that involve Loken are particularly awkward as her opponents practically have to fling themselves at her weapons in order for her to actually look like she's winning.

Loken is awful in BloodRayne, but then again she can't act.  Even so, she's leagues better than the cast members who can, but choose not to.  Madsen sports a weird mullet (the kind always worn in Romania in the 1700s) and gives as little energy as possible to still remain conscious onscreen, Zane and Kier eat the scenery with abandon, and Rodriguez delivers all of her lines in an unintelligible mumble.  But the big booby prize goes to Sir Ben Kingsley.  Why in the hell did this man agree to be in this garbage?  It's hard to say if Kingsley is taking this role seriously or not because, for the most part, he does his best impersonation of a wax statue.  Seriously.  For the bulk of the movie he is shown seated in a throne, not blinking, and reciting the dialogue while barely moving his lips.  Only in the finale does he show a pulse.  Easy paycheck, maybe?

Uwe Boll has made his career turning videogames into godawful movies.  As lousy as BloodRayne is, compared to Boll's Alone in the Dark, House of the Dead and Postal, it actually comes off pretty well.  That should tell you all you need to know about how incompetent the other films in his oeuvre are.  BloodRayne might even be the only film in the new millennium that is actually worse than the direct-to-DVD sequels that followed it.