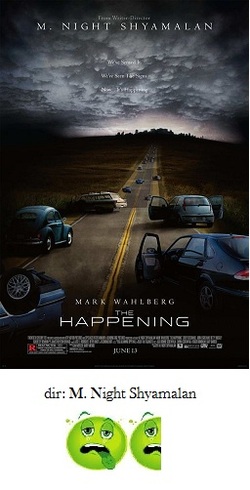 With The Happening, director M. Night Shyamalan asks a lot from
the audience.  The premise behind the movie is so odd and strains the limits of believability that most viewers will simply check out.  You either accept and go with it or you don’t.  There is so much interesting atmosphere and skill in the direction that I could give most of it a pass, but still, it is awfully silly.

The Happening begins in Boston as a group of people in a park suddenly become immobilized by some unseen force and then proceed to commit violent suicide. One woman jabs a knitting needle into her neck while her friend watches in horror.  But the mystery doesn’t stop there as it seems that whatever is going on is spreading further into the city as other citizens begin jumping off of tall buildings, shooting themselves and hanging themselves from trees.

Our main characters in the movie are science teacher Mark Wahlberg and his wife Zooey Deschanel and we follow them, along with various bands of survivors trying to escape the city, as they flee into the country.  As likable as Wahlberg and Deschanel are usually, their performances seem curiously muted, except for a bizarre, scenery-chewing Betty Buckley who appears late in the film.  With all of the chaos that surrounds them you’d expect a little more hysteria, but for the most part they kinda remain rather deadpan about it all.

So, what is happening in The Happening?  Well, the explanation has something to do with a self-defense response from plant life that is trying to kill off a sizable portion of the human population.  It seems there is this chemical being released into the atmosphere, but Shyamalan presents this by showing us the breeze blowing through the trees and it’s this breeze that all of the characters are trying to outrun. Yeah…but no.  Is it even possible to outrun the wind?  I kind of doubt it.

As goofy as this story is, Shyamalan is almost able to overcome it.  He creates a lot of genuine tension and the movie is at least watchable and never boring; it’s just when the explanations of the hows and whys of what is going on are explained, confusion and bewilderment outshine the good stuff.

Many critics and moviegoes jumped on top of The Happening with both feet, considering it a cinematic disaster of biblical proportions.  But compared to the films Shyamalan directed both before and after it, The Lady in the Water and The Last Airbender, respectively, The Happening is nearly an outright success.