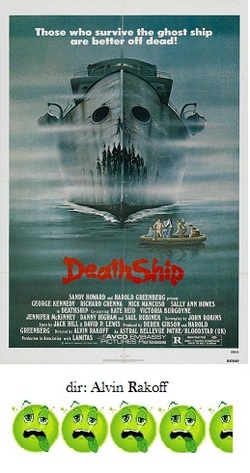 There was a kernel of a good idea somewhere within the junky Death Ship, but whatever it was got buried underneath a morass of cheap sets, tinny sound design, flat acting and intense boredom.

The cheeseball nature of Death Ship becomes apparent right away as we see a luxury cruise ship get rammed and sunk by a big, rusty, black ship that is completely uninhabited except for a bunch of disembodied voices barking orders in German.  The sinking occurs in about thirty seconds without any sense of doom.  Then we immediately cut to a small group of survivors in a lifeboat which include captain George Kennedy, cruise employees Richard Crenna and Saul Rubinek, Crenna's wife and obnoxious children and a couple of other random people.  It seems that the smart people went down with the cruise because these idiots take awhile to notice the black ship right behind them.

Essentially, all that Death Ship has to offer is a bunch of endless scenes of the survivors walking around the haunted vessel, slowly coming to the conclusion that something weird is going on.  The fact that there is no fuel, the instruments move themselves and everything is covered in cobwebs wasn't enough of a tip-off.  What is this ship?  Apparently, it was a Nazi trawler that was a sort of a torture chamber of the high seas during WWII.  In the only decent sequence, Crenna discovers three rooms late in the film; one is painted red with Nazi regalia hanging everywhere, another is a white, medical room with drawers of gold teeth, and the third is a torture chamber with mummified corpses still strapped into the devices.

Anyway, our survivors start getting bumped off (one woman's face starts melting off after she eats tainted candy, and another woman takes a shower where blood sprays from the head and she starts freaking out and flinging herself around the stall...how this kills her, we never really find out) and Kennedy starts becoming possessed, throwing people overboard and bellowing that "The ship needs blood! Blood! BLOOD!"  Crenna and family are able to escape and Kennedy flips out and begins shooting up the engine room before falling into the gears and getting dismembered.

This all probably sounds more entertaining than it is.  Death Ship is slooooow going, indeed, and it looks and sounds incredibly cheap.  After all, once you've seen the navigational instruments move themselves once, the other hundred or so times loses much of its impact.  It's all just a lot of scenes of people walking around while we try to listen to their dialogue that's drowned out by all of the ship's creaking.  The editing is also problematic.  Many scenes seem to kind of bleed into each other, kind of beginning and ending at random; for example, Crenna is freaking out while in the movie theatre room and then suddenly he is sitting at a dining table and stabbing Kennedy with a knife.

If you want a really good and suspenseful maritime horror movie, check out the little seen and underappreciated Below from 2002.  Heck, even the crappy Ghost Ship from the same year is a better bet than the largely and thankfully forgotten Death Ship.