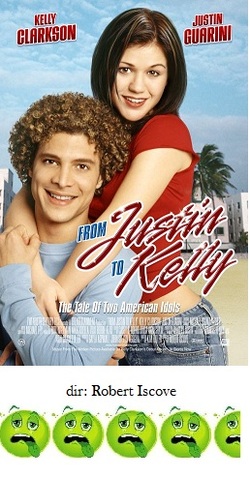 Movies that are made in order to capitalize on some current pop culture fad are, without exception, wretched.  Whether that fad is roller disco (Roller Boogie, Xanadu), breakdancing (Breakin', Beat Street, Body Rock), lambada (Lambada, The Forbidden Dance) or any other trend that is officially dead by the time the movie comes out. Fad movies are junk.  Case in point, From Justin to Kelly, a drearily dumb musical meant to cash in on the popularity of the television show 'American Idol' and its top two songsters Kelly Clarkson and Justin Guarini.

From Justin to Kelly is a virtually plotless beach party movie where Clarkson and her girlfriends, bitchy Katherine Bailess and sassy Anika Noni Rose, encounter Guarini and his two buds, studmuffin Greg Siff and nerdy Brian Dietzen while in Miami on Spring Break.  When Guarini sees Clarkson he falls instantly in love, and not to disparage Clarkson's looks, as cute as she is, but she's hardly the bombshell one would pick out of a crowd of scantily clad party girls.  But then again, I can at least see why Guarini would go for Clarkson, whereas the inherent hotness of Guarini is the big mystery, unless someone had a certain fetish for Monchhichi dolls or Sideshow Bob from 'The Simpsons'.

So is there anything else to the plot in this movie?  Not really.  Essentially, Bailess wants Guarini for herself so she sabotages their romance by sending text-messages which cause no end of confusion to the lovebirds: Guarini doesn't show up at the beach...Clarkson gets mad, Clarkson doesn't show up at the club...Guarini gets mad, and so on.  Yes, the film's entire bit of complication and intrigue surrounds text messages.  Anyway, this tedium continues until Bailess's plan is uncovered, and after some hard feelings, she sets Clarkson and Guarini up  for the romantic climax...a performance of "That's the Way (I Like It)".  The single likable element of the whole movie is the rather sweet romantic subplot between Rose and waiter Jason Yribar, it makes you wish the movie was actually called From Carlos to Kaya.

Yes, From Justin to Kelly is about as flimsy a movie as your likely to see.  However, one shouldn't be surprised when the person behind the brain-dead screenplay is Kim Fuller, the 'scribe' who coughed up the screenplay for the Spice Girls movie, Spice World, which is, believe it or not, even worse.  Technically, this movie is a musical, sorta, but it makes the same basic mistake of so many bad musicals in that if the songs and musical numbers don't actually serve any purpose in either developing character depth, propelling the plot or providing any vital story information, then they should be eliminated altogether.  So, the movie just kind of stops dead at random intervals in order for a pointless musical number, and then the movie continues on as if nothing ever happened.  As far as the acting goes, well, it shouldn't come as any surprise that neither Clarkson nor Guarini have been called up to make another movie.  Truth be told, Clarkson may have won the first season of 'American Idol', but Guarini is the far better thespian, and that's not saying much.

From Justin to Kelly opened and promptly bombed at the box-office losing nearly two-thirds of its production cost.  Sometimes even young fans without any taste can't be fooled.