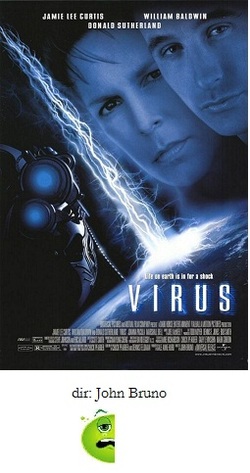 I have to admit that I enjoy this particular genre of movie. You know the one, a small group of people are trapped somewhere and are picked off by some malevolent creature. Alien pretty much started this big trend and it has been done to death. Virus is yet another entry in this genre, although it isn't great, I kind of enjoyed it in a sick, guilty-pleasure type way. Hell, I even liked Phantoms from the previous year (couldn't stand Deep Rising so, go figure).

The flick starts off with a strange energy field passing through the MIR space station, which in turn accidentally shoots an electrical signal down to a ship/laboratory. This signal causes bolts of eletricity to shoot through the ship, computers to run themselves and generally make mayhem for the crew.

Days later a small salvage boat happens upon the ship which now seems abandoned except for the occasional chunky blood splatter on a wall. So, what happened? The crew, led by Donald Sutherland, Jamie Lee Curtis and William Baldwin are slow to figure it out, natch. You see, some strange alien energy has taken over the ship, downloading information and assembling itself into robots.

Eventually they are able to communicate with the evil alien energy via computer. Humans are the virus, you see, and are just walking loads of spare parts the robots can use. Crew members are subsequently picked off one by one, but reappear as half-human, half-robot killing machines.

If you want cool special effects and a high gore quotient, then Virus will satisfy those needs quite nicely. If you're looking for any kind of clear cut explanations, motives or logic, you might want to look elsewhere. It's never too clear what the alien wants, or how it expects to conquer Earth, and the finale leaves a lot to be desired (it is comparable to the awful jet-ski escape from Deep Rising).  Virus fulfills that action need without being too awful, which for this creature genre, is an accomplishment. I'm not saying it's a great movie, maybe not even a good one, but it does the job.

But then again I can always sit through viewings of such wretched opusus as Deep Star Six and Leviathan without complaint, so I may not be the most objective reviewer of Virus that there could be.