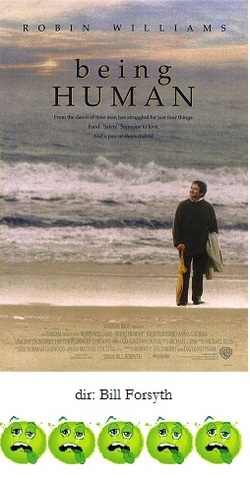 I dare anyone to sit through Being Human without falling asleep, and I don't say that lightly. This movie has to be one of the dullest and most pointless excuses for entertainment I have ever seen. It's pure Sominex on celluloid.

The premise for this sleeping pill has to do with five separate characters all named Hector and set in five different points in history. There's a caveman Hector, a Roman slave Hector, a Portugese nobleman Hector, a medieval Hector, and a modern day Hector. All Hectors are played by Robin Williams in one of the most extreme cases of UNDER acting, which I guess is no small feat for him. Anyway, Being Human, I guess, tries to tie all of these stories together as sort of a paen to man, and that no matter what time in history it is, man deals with the same sorts of problems. That's what being human is in Being Human. Get it?

On paper it sounds like an intriguing idea, but the results are sheer torture. Caveman Hector has a family that ends up getting abducted by a rival tribe. Roman Hector is a slave owned by a Roman nobleman (John Turturro), and the nobleman wants Hector to commit suicide with him. The Portugese Hector wanders around a beach for hours after a shipwreck, and so on. Each segment goes on for interminably and has no point or resolution. There are endless discussions about the point of being alive (at least that is what I could deduce for the arch prose), and lots of wandering around pretty landscapes.

This flick is a thundering failure. I am a fan of the director Bill Forsyth (Local Hero, Gregory's Girl, Housekeeping) but I don't know what he was trying to do with this screenplay. The result is a negligible experience. I have to admit that, yes, I did indeed fall asleep before the end. But I was damned if I was going to watch it again, I just skipped to the end, where the modern day Hector takes his kids to an amusement park, then the credits rolled.

It might be a good idea to keep a copy of Being Human handy for those sleepless nights. You may never have insomnia again.