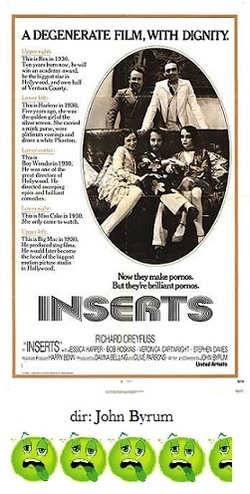 There isn't really a plot to speak of, characters just enter, blather a bit, and then exit, all while Dreyfuss drinks himself into a stupor and occasionally shoots up heroin.  Dreyfuss is supposed to be making his movie but is having issues with his tempermental actors; Cartwright and Davies can't stand each other.  Davies takes off and Cartwright O.Ds in the bathroom, so how will Dreyfuss finish his movie?

There's just not a whole lot else to say about Inserts.  The acting is perfectly adequate and the art direction of the mansion is interesting to look at, but beyond that, the whole movie is a weird kind of dead zone.  There is nothing appealing enough to draw any viewer in and nothing stimulating to keep them invested.  It's a flaky, one-of-a-kind oddity.