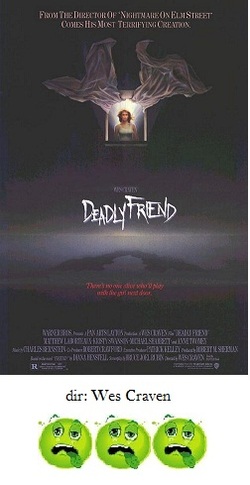 As great as Wes Craven can be, he's had more than his share of misfires.  The goofy and misdirected Deadly Friend certainly qualifies as one of those, and it's a shame, too, since the source material is so good.

Deadly Friend is based on the terrific Diana Henstell novel, Friend, which was sort of a teen variation of the Frankenstein story.  Matthew Labyorteaux plays a 15 year-old genius who is enrolled in the neurological program at the local university.  He knows all there is to know about brains and computers and his closest friend happens to be a robot he built.  Kristy Swanson is the beautiful girl next door whom Labyorteaux becomes friends with; the only problem though is she lives with her drunken, abusive father.  So, it's not long before Daddums accidentally kills Swanson and Labyorteaux steals her corpse, and then implants a computer chip in her brain in order to resurrect her.  It works, sort of.  Swanson is reanimated, but she has a murderous streak and goes on the predictable rampage.

On paper, Deadly Friend seems to have it all: Science-fiction, romance, and horror; unfortunately, it also has unintentional comedy.  The first problem is Swanson's performance.  It seems pretty clear that neither she nor Craven ever really got a handle on how her character should be potrayed once she is reanimated, therefore she walks around awkwardly with eyes as big as saucers and makes her hands into the shape of pinchers (much like the hands of the robot).  However, she drops this stiffness whenever it is convenient.

Also, it's never really made apparent why she should have superhuman strength, either.  The one moment everyone remembers from the movie is when Swanson decapitates crabby neighbor Anne Ramsey with a basketball simply be throwing it really, really hard.  And the bizarre shot of Ramsey's headless body flailing around, which looks exactly like a dwarf in a fake torso, is completely hilarious.  The lame non-ending ending also serves to frustrate.

Several of Craven's films have been known to have gone through serious post-production problems and studio meddling, and I have to wonder if that's what happened with Deadly Friend.  His heart didn't seem to be in it.  There is zero suspense, zero scares and a complete mismanagement of tone.  It feels more like an odd curiousity than a fully-realized film.  Read the book instead.