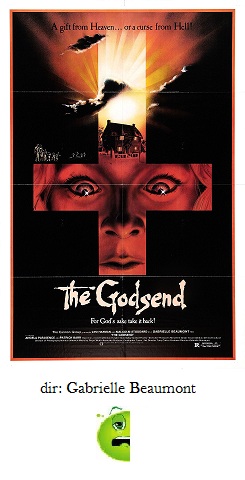 For the most part, The Godsend is a decent entry into the horror sub-genre known as 'Evil Kid' films.  You know, like The Omen, Village of the Damned, The Good Son, and Orphan, to name a few.  This British chiller has a good premise and some effective moments, but is hampered by a slow-as-molasses pace and a key actress who just isn't very good.

Malcolm Stoddard and Cyd Hayman are a happily married couple with four  children who meet an odd young pregnant woman (Angela Pleasence, daughter of Donald) at a park.  Anyway, Pleasence is invited to the family's home, which is way out in the country, and, naturally, she begins to go into immediate labor.  With no way to get to a hospital, Pleasence gives birth to a little girl; however, the following morning, she disappears, leaving the newborn to the perplexed couple.  But determined to make lemonade out of this situation, they decide to adopt the baby as their own.  Needless to say, here is where their troubles begin.

Over the next few years, their natural children begin to get bumped off in suspicious fashion, and it takes the couple a looooooong time to decide that something is amiss.  Eventually, all of the kids are dead, Stoddard is rendered sterile and the couple's marriage ends when Hayman steadfastly refuses to believe this child is capable of evil.  Unfortunately, Hayman's character isn't written believably enough to get us to accept her cries of motherly obligation, so instead, she comes off as a bit soft in the head.

The acting by the majority of the cast is low-key but decent enough, and the actress who plays the evil girl as a toddler, Joanne Boorman, is very effective because she appears so cheery, cute and innocent but is able to convey the malevolence under the surface.  The actress who plays the older version of the evil girl, Wilhelmina Green, isn't good at all.  She spends the majority of her screen time scrunching up her face to the camera into a visage of menace that is laughably hammy; yeah, like no one would suspect this child is seriously bad news on sight.

For those who like this sort of thing, The Godsend is worth a look, just remember that watching it won't be the edge-of-your-seat-type experience you may be anticipating.